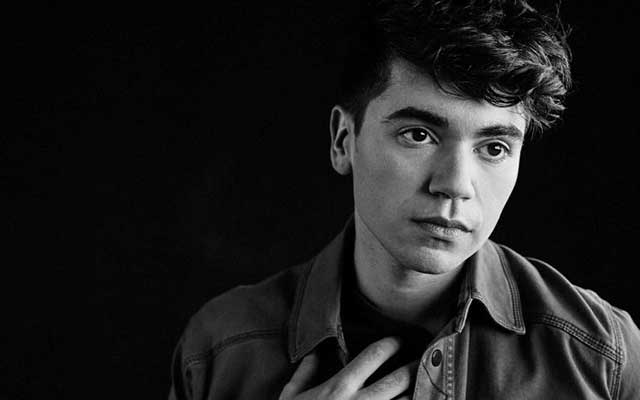 At 22 years old, Noah Galvin is the star Dan Savage’s The Real O’Neals on ABC. But unlike his 16-year-old character, he is brash, political and totally opinionated in the most New Yorker way possible.

Galvin is unafraid to say what’s on his mind. In a new interview with Vulture, he critiqued Modern Family’s Eric Stonestreet for gay minstrelsy and called Colton Hayne’s coming out as “pussy bullshit.” He also talks about his experience coming out in Hollywood, what life has been like on TV and his relationship with Dan Savage.

“[Dan Savage] is the smartest gay man you’ll ever meet in your life,” he said. “He’s the most articulate. The thing about Dan is he is primed for combat at all times. Like, ready to throw down. And not only ready to throw down, but ready to win whatever debate. And he will… More recently for me, he has been a source of advice in terms of kids who want to reach out to me or want to share their coming-out experiences. I got a slew of tweets like, ‘I don’t feel safe at home. I don’t know how to talk to my parents.’ And I was like, fuck. How do I deal with this shit? So I screenshot it and sent it to Dan and was like, What do I do with this? That’s a thing that Dan has been a homie for.”

Since coming out publicly, journalists have continuously asked him about it. According to Galvin, it was never a point of contention, but rather a discussion point.

“I have a very large crew of people that all weighed in,” he said. “But because of the show and the character and this opportunity I’m being given, I couldn’t not come out publicly, solely for the people that watch our show. Too often, gay characters on TV are being played by straight people. Some play stereotypes of gay people, some don’t. But more often than not, the people playing gay on TV are either not gay, or they are gay and they’re not out of the closet…

“It’s important to me that with this slightly revolutionary thing we’re doing on network television that I should go full force and follow through as completely as possible. And it’s paid off in ways. In terms of, like, the kids who watch my show and say thank you for being open about who you are, and playing this character, and bringing a level of authenticity that maybe somebody else wouldn’t have. I like to think it makes it that much more relatable. And older people who watch the show are like, damn, I wish I had something like this on TV when I was younger to normalize my situation and make me not so self-hating…

“But, on the other hand — it’s only happened like once so far — but I missed out on an opportunity, or wasn’t granted an opportunity, because people in L.A., producers and casting directors, are not the most creative. I don’t have like 30 IMDb credits. I have one. So when they see me play this character, they’re like, Oh, he’s really good at playing the funny gay kid. That’s what he does. Let’s have him do more of that! And I don’t really want to do that. I play this character, but I come from doing avant-garde, off-Broadway theater, playing all types. I want to keep doing that.

“So it was a discussion point, something we talked a lot about. Maybe I did fucking ruin my career right off the bat by doing this. But it’s done some good. And I’m hoping that with time, I’ll be given those opportunities to play other characters.”

The realities of Hollywood casting can be traumatic for gay actors. Galvin has already experienced it, claiming that he missed out on a part playing a straight guy because one of the producers said he was “too gay.”

“It was horrible,” he reminisced. “It made me feel so shitty. I was like, Well, how did I get so far in the process if I was ‘too gay’? Obviously that’s one person’s opinion. Somebody who watches our show is maybe blinded by the fact that I play gay on this television show — I’m sure there are a thousand contributing factors. And maybe I was, like, ‘too gay’ in that audition. I don’t know. I don’t get to watch the audition tape, you know? So it’s an interesting thing I’m learning to navigate and having to deal with for the first time.”

When it came to actors like Colton Haynes, Galvin had a few things to say, responding to the fact that he never actually said he was gay when he came out:

When it comes to his character’s flamboyance, Galvin said he’d rather have it mirror his own reality.

“If I’m with a bunch of gays, I’m going to be like, Yas queen! Yas, yas, yas! But when I’m with my brothers and we’re wrestling, I’m going to bro out,” he said. “And I want Kenny (his character) to be that. I don’t want Kenny to just be the Eric Stonestreet. I want him to be a person. I want him to have levels to him. A lot of portrayals of gays on television don’t allow for that… I think as wonderful of an actor as Eric Stonestreet is — I’ve never met him, I assume he’s a wonderful guy — he’s playing a caricature of a caricature of a stereotype of stereotype on Modern Family. And he’s a straight man in real life. And as hilarious as that character is, there’s a lack of authenticity. I think people — especially young gay kids — they can laugh at it, and they can see it as a source of comedy, but like, nothing more than that. And I want Kenny to be more than the funny gay kid.”

And just in case, you were wondering about his dating life, you have nothing to worry about. Galvin has two men he’s courting with – one of them in his late-30s.

“My dating life is already pretty shitty because I look like a 12-year-old,” he said. “Being on TV just adds another level of difficulty to the dating thing. First of all, I’m gay, and that’s just hard because gays are naturally a promiscuous collective of people. So there’s the lack of monogamy and then there’s me looking like a 12-year-old. And then there’s being in L.A., where half of the men are closeted and the other half are just dumb. But also gay boys my age are either club kids or they’re in college and they haven’t come out yet and they’re still DL on Grindr. So I tend to date people that are slightly older, but then I get into this situation where they’re just, like, twink hunters. I’m like, ‘No, I don’t want to date you, you 45-year-old man…’

“I’m seeing two people right now. I’m seeing a 24-year-old and I’m seeing a … I think he’s like 38. But it’s nice. I’m dating for the first time ever. I never really did that in New York. So it’s interesting, I’m slightly capitalizing on the fact that I’m on a TV show, to a certain extent. Using my slight fame to be with sexier people than I normally could be if I wasn’t on a TV show. So yes, these are not the people I want to end up dating, but I’ll go out.”

UPDATE: Less than 24-hours after his interview went viral, Galvin apologized on Instagram and Twitter. You can read his apology posts below.