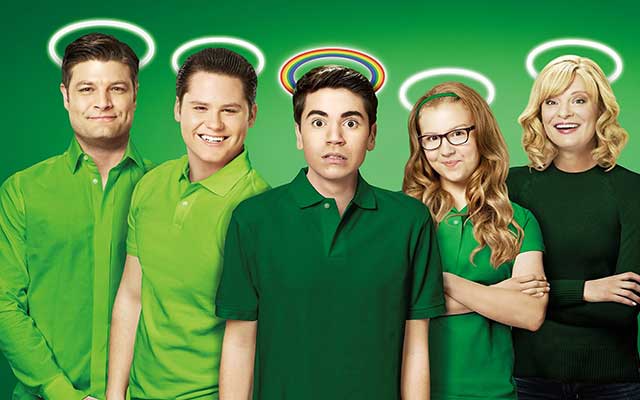 Just in case you’re coming late to the party, let us introduce Kenny O’Neal, of The Real O’Neals played by Noah Galvin — ABC’s newest gay character on the network.

We’ll catch you up quick.

Galvin’s character, Kenny, comes out to his conservative Catholic family after each character exposes their affairs causing them to reflect on their once perfect personas. Although the show is a comedy, the writers have been giving commentary about real issues within the gay community, creating conversation intended to critique certain stereotypes.

We know what you’re thinking, “with all the gay guys in primetime, why does this dude matter.” Let us tell you; The Real O’Neals is the only series on ABC with a gay individual as the lead of the show — pretty progressive right? Until now, ABC has only introduced gay and bi-sexual characters as secondary story lines such as Connor Walsh played by Jack Falahee from How to Get Away With Murder; Cameron Tucker played by Eric Stonestreet from Modern Family as well as Simon Asher played by Tate Ellington on Quantico.

If that’s not enough, Galvin’s character is loosely based on the experiences of journalist and LGBT activist Dan Savage, who also serves as a producer on the show.

Are you excited for Season 2?