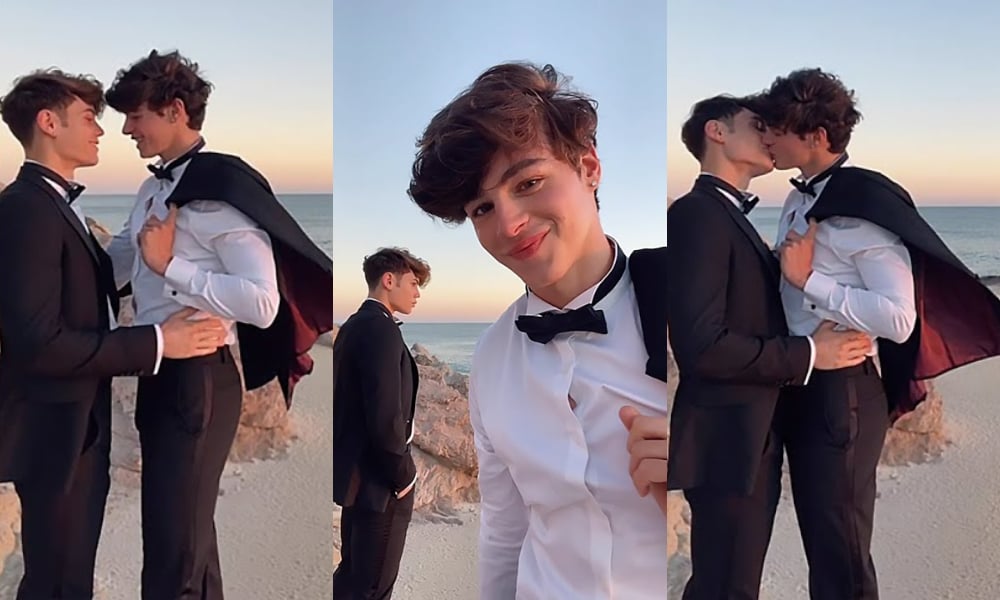 Nicky and Pierre Secretly Got Married in Las Vegas

TikTok stars Nicky and Pierre got married in Las Vegas.

That’s right; your favorite gay TikTok couple, Nick Champa and Pierre Amaury Crespeau, tied the knot in an intimate and secret ceremony in Las Vegas, Nevada. Champa, 27, and Crespeau, 36, started dating in 2017, and they met in an adorable way.

Before becoming viral TikTok sensations, Champa and Crespeau were aspiring actors living in Los Angeles. While on an audition, Champa noticed Crespeau sitting across from him in the waiting room. He was immediately taken by him. So, he did what any of us would do; he took a picture of Crespeau and sent it to his manager, who, as luck would have it, also represented Crespeau.

In February, the couple appeared on our podcast and Snapchat show; Champa told the story.

“So we met at a movie audition; it’s a funny story. So, I texted my manager and I was like, this beautiful guy walked into the room, and I don’t do you know anything about him. And he was like, send me a picture of him. So I snuck a picture, and it caught my boot in it, which would come to be how he knew it was me. I sent him the picture and my manager, and then I didn’t hear anything back. I was texting him, and the three dots showed up, and then they went away, and then I heard someone’s phone go off in the room … my phone.”

Champa continued, “I look over, and he’s looking at his phone, and that’s when I got the picture. And then my manager, our manager texted me, was like, he’s my client, Pierre. I just sent him the picture; talk to him. And I was like, ‘oh my God.” I was so embarrassed and just wanted to die. And then I see him get up, and he came over to me, and the rest is history.”

Where was Nicky and Pierre’s wedding?

According to TMZ, Nicky and Pierre’s wedding was in August in Clary County, Nevada, which is home to the city of Las Vegas. According to the records, the TikTok stars took each other’s last names.

Their secret wedding did not come as a surprise to fans. They have been attached at the hip since they met. In fact, their public relationship, in part, skyrocketed their follower count to more than 25 million combined. Their Disney-Prince good looks and hilarious shenanigans help, too.

In addition to marriage, Champa and Crespeau listed their Bell Canyon Home in July and signed a lease on an apartment in Paris, France. The couple has been traveling between France and the United States this year.

In addition to being gay TikTok royalty, Champa and Crespeau launched a YouTube channel that has already amassed more than 1.3 million subscribers. Additionally, they started a show on Amp called ToxicAF.

Nicky and Pierre Secretly Got Married in Las Vegas