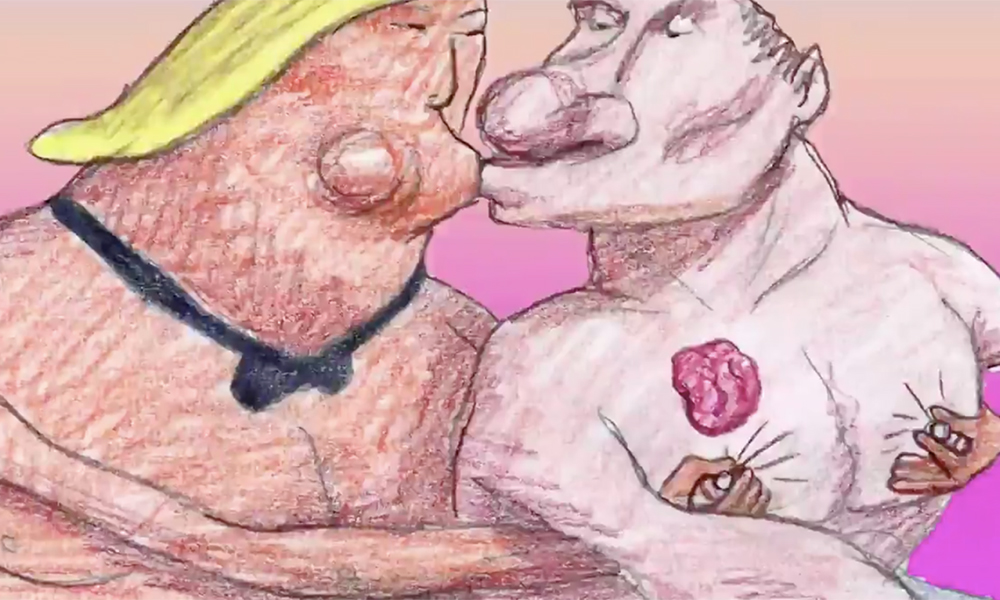 New York Times under fire for ‘homophobic’ cartoon of Trump and Putin.

Activists said the satirical animation in the New York Times implied homosexual relationships were shameful or laughable, echoing homophobic bullies and adding to pressure on young people struggling with their gender or sexuality.

The New York Times said the video, which has been viewed more than 1.3 million times on Twitter alone, was “not meant to be homophobic”.

In this episode of Trump Bites, Donald Trump’s not-so-secret admiration for Vladimir Putin plays out in a teenager’s bedroom, where the fantasies of this forbidden romance come to life. https://t.co/cWeQMuzWUz pic.twitter.com/4shBRkloot

Activists however expressed fears over its impact on young lesbian, gay, bisexual and transgender (LGBT) people, who research shows are at higher risk of depression and suicide.

“There seems to be no greater insult than comparing someone to a queer person,” American transgender actor and activist Jeffrey Marsh — who does not identify as male or female — told the Thomson Reuters Foundation.

“For an LGBTQ youth, it’s not background noise. When it comes up on their feed it feels like a direct personal attack, and to have a group that’s as well-established as the New York Times personally attacking you feels horrendous.”

“Using sexual orientation or gender identity as an insult or joke punchline can send a message to young people that being LGBTQ is inherently negative,” said Paley.

“Now more than ever, LGBTQ youth need to see positive and affirming representations of themselves in the media, a major step in letting them know that they are valued and never alone.”

A spokesman for the New York Times defended the animation in an email saying the artist Bill Plympton was “known for his irreverent, unsettling and at times disturbing cartoons”.

Kim Sanders, head of media engagement at the British charity Stonewall, said the images “reinforce a harmful narrative that being LGBT is inferior or something to be ridiculed”.

“Depicting public figures as gay or bi in an attempt to mock them is a damaging trend that needs to stop,” Sanders said.

According to The Trevor Project, young lesbian, gay, and bisexual people are more than four times more likely to attempt suicide than their straight peers, while nearly half of all transgender people have attempted suicide.

A study by the US Centers for Disease Control and Prevention released in June found that a third of lesbian, gay and bisexual youth are bullied at school.

Reporting by Sonia Elks with editing by Claire Cozens.