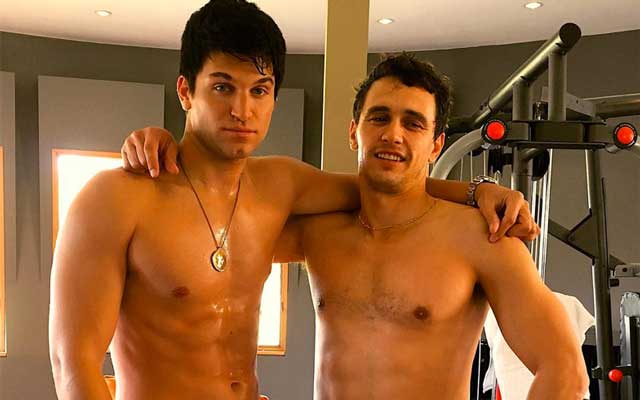 James Franco, who turned 38 today (April 19, 2016), recently sat down with art critic Jerry Saltz to discuss his place in the art world. Saltz hasn’t been the biggest fan of the actor’s art, calling his 2014 show at the Pace Gallery “silly self-obsessed demi-drag re-creations” and that “at this point George W. Bush is actually a better artist than James Franco.”

In the interview for New York magazine, Saltz said “If I’m to be honest, my second self is also real,” referring to a past interview when Franco said he was gay in his art, but straight in his life. “So if you said, ‘I’m gay in my work,’ I guess that must mean that you’re also gay. If I’m an asshole in my work, I’m also an asshole. A lot of gay men have said to me, well, Franco’s kind of a gay cock tease.”

“Yeah,” Franco responded. “There is a bit of over focusing on my sexuality, both by the straight press and the gay press, and so the first question is why do they care? Well, because I’m a celebrity, so I guess they care who I’m having sex with. But if your definition of gay and straight is who I sleep with, then I guess you could say I’m a gay cock tease. It’s where my allegiance lies, where my sensibilities lie, how I define myself. Yeah, I’m a little gay, and there’s a gay James.”

The gay media has been up and down about Franco’s genuineness, too. However, the popular opinion is positive. The gay community is happy someone of his stature is producing queer films (we need more of them). But in many ways, the “gay experience” as told through his films aren’t particularly accurate for most. In many ways, he fetishizes the genre.

While he’s played many queer roles (many of which he didn’t direct), much of what he says about the gay experience are told through an outsider’s perspective rather than from a man who lives it. I’m sure we’d feel a lot better if he said “Yes I’m bisexual, and here is my experiences about it.”

His obsession with gay culture seems to be the root of his art, at least in film. Many gay guys don’t know how to handle his storytelling: do we look away, or should we tilt our head and say, “… thank you? It’s evident in films like Wild Horses, I am Michael, Milk, Howl, Sal, Interior. Leather Bar, and now King Cobra that he’s working for an official gay card.

But who he is as a person says nothing about what he’s doing for queer cinema. I’m always going to be pro-Franco, but I admit it is a little touchy when someone says he’s a “little bit gay” as if we’re a flavor of the month. Clearly that little bit of “gay” is an idea, a prototype, rather than truth, which is the stem of art. What do you think?