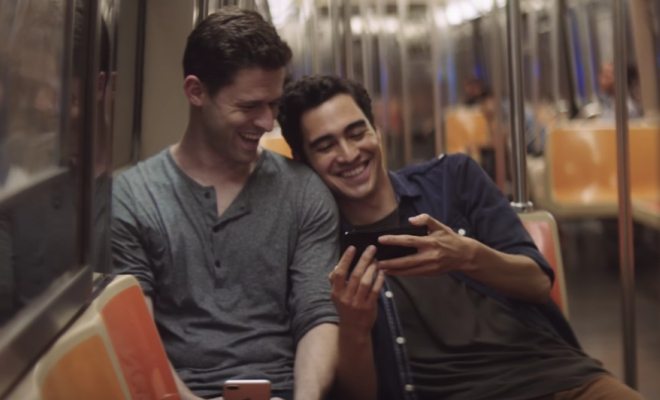 At Apple’s annual conference on Wednesday, openly gay CEO Tim Cook introduced the iPhone 7, which features an improved camera, wireless headphones, and a water-resistant case. After announcing the sleek new smartphone, the tech giant released a beautiful commercial that includes a same-sex couple.

The commercial features two young men cuddling on a subway while cooperatively using the device to browse the Internet and snap selfies. Cook told The Washington Post that he wanted Apple to empower young LGBT people.

Related: Playgirl Wants Ryan Lochte to Take Off His Speedo

“I was thinking about kids. I was getting notes from kids who knew I was gay or assumed I was, because of something they had read on the Web. And they were kids who were distraught. They thought they couldn’t achieve anything. They were seeing the national discourse around it and feeling isolated and depressed,” Cook said.

He added, “I just thought — I’ve got to do something … [I’ve got to show] that it’s not a limiter. It’s okay to be [gay]. That it’s ok, to be honest about it. I figured if I could help one person, it would be worth it.

Watch the clip below and keep an eye out for the adorable couple!