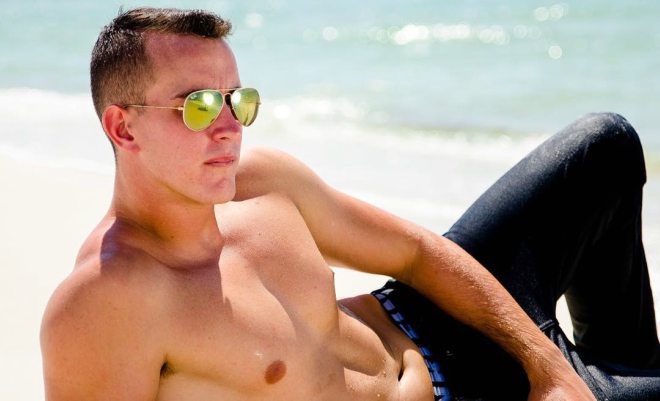 Conner Curnick, 22, is a Petty Officer Third Class in the U.S. Navy on assignment in Afghanistan. He’s a former college water polo player who’s competed in several Spartan races, and he accidentally came out as gay on Instagram. To Curnick surprise, his Navy buddies and his family immediately rallied in support.

The photo that outed Curnick was of him and a male friend riding on his motorcycle. Curnick wrote about his experience in an essay published on Out Sports.

He writes: “I was alone at the time and in tears, and I decided to come clean — yes, I’m gay, I told them. The reactions started coming in and, to my relief and surprise, they were overwhelmingly positive.

While I did lose a few friends, the ones closest to me became even closer, because I no longer had to lie about who I was and for the first time they knew what was really going on in my life. Pensacola will always hold a place in my heart for changing me in the way it did.”

Happy Friday Y'all. Photo by @mr_keith_w

Since coming out, Curnick says he feels “much happier”, and that coming out as gay has benefitted his life. “Since coming out, I have become a much happier, productive and successful person. I have since been to the Middle East twice and been awarded accolades for my achievements. I have received letters of accommodation from leaders at Combatant Commands and won Sailor of the Quarter at my command of 2,300 Sailors,” he added.

In the essay, Curnick also addressed discrimination and intolerance within the military. “I still face discrimination, and I understand that it is an unfortunate reality of living openly and fighting for equality. I am currently working with fellow LGBT sailors to start an organization at my base for LGBT service members to promote understanding and ensure equality in the workplace. I hope that in the future, people won’t have to “come out,” but they can simply say this is my boy/girlfriend and be accepted by everyone.”

Since the repeal of Don’t Ask Don’t Tell in 2013, the military has become much more tolerant of LGBTQ soldiers. Although, discrimination is still an obstacle for many soldiers who fight for freedom as well as equality.

Read the entire essay on Out Sports.