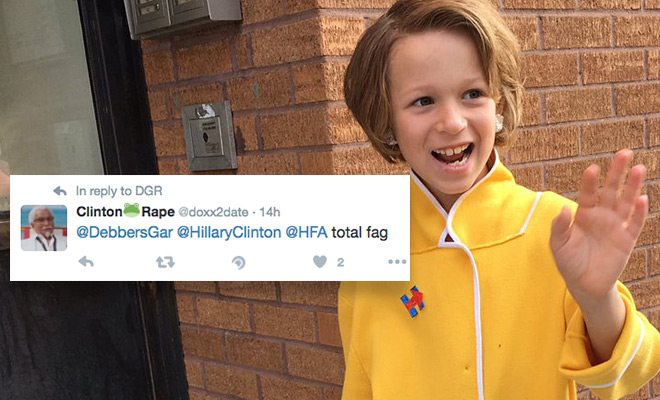 Twitter user @DebbersGar tweeted a photo of her son dressed as Hillary Clinton for Halloween, and a horde of homophobes promptly lashed out. The boy hit the streets of New York sporting a bright yellow pantsuit jacket, simple flats, clip-on earrings and a custom HC briefcase.

His mother stated that they initially suggested their daughter dress as Hillary, but when she declined their son ran with it. Her original tweet read, “Our 8 year-old son is with you @hillaryclinton today and everyday. #halloween2016 #notawig #imwithher #heswithher #wholefamswithher @HFA,” and within minutes the trolls rolled in.

Reactions to the costume were mixed, but several trolls attacked the entire family. @TravisBickle96 asserted that “dressing up a boy as a girl is stomach-churning. They continued, “Because they are a lesbian couple and they’re indoctrinating him into becoming gay. Sick.” Twitter user @doxx2date pulled no punches and called the child a “total fag.”

Regardless of your political views, slinging homophobic slurs at a third-grader is pathetic and inexcusable. So far, his mom’s aren’t backing down. They recently tweeted, “We’ll be back at it with the blow dryer tomorrow morning for Halloween.”