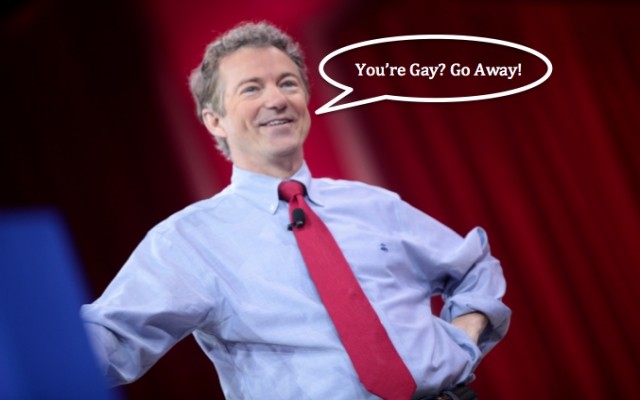 Hillary Clinton Schools Rand Paul with a GIF on Twitter

Republican candidate Rand Paul was feeling extremely intolerant in Iowa when he suggested that business be given the right to fire employees for being gay. What next, Rand? Maybe gingers should have to use separate bathrooms.

Rand Paul on LGBT workers losing their jobs: “If you are gay, there are plenty of places that will hire you.”

Thankfully, our hero, Hillary Clinton came to the rescue and schooled that fool on Twitter.

The feeling when a GOP candidate says it's acceptable to be fired for being gay. https://t.co/cF9mw5k8fq pic.twitter.com/cYFvcW27mQ

The best part of Clinton’s reaction was the epic GIF she used to get her point across. Whoever’s running her Twitter deserves a bottle of wine and a Gun Oil gift basket. Seriously, that was slick. Whether or not you agree with her politics, it’s hard to deny Hills got skills. Amiright?

Hillary Clinton Schools Rand Paul with a GIF on Twitter