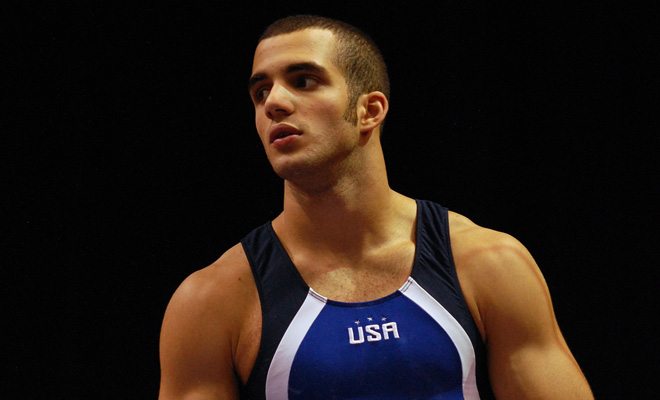 In an interview with the Wall Street Journal Leyva’s teammate Sam Mikulak, a four-time champion, said “Maybe [we should] compete with our shirts off. People make fun of us for wearing tights. But if they saw how yoked we are maybe that would make a difference.”

Unfortunately, Leyva’s spontaneous striptease wasn’t during a competition; it was part of an improvised routine. The crowd-pleasing display of athleticism was reported on by media outlets around the world and garnered him a lot of attention from the gay community.

Following the Orlando Shooting, Leyva posted a two-part video on Instagram, which declared his support for the LGBT community. In the video clip, Leyva wore a “Make America Gay Again” tank top and said, “The love within the LGBT community is so much stronger than the hatred against it.”

Part 1 of my thoughts of the Orlando shooting… So many thanks to my amazing friend @alicebeggs for helping me get my thoughts into coherent words.

“And it is our responsibility as non-LGBT people to help emulate this love and create a world where LGBT people don’t need to create their own safe spaces,” he added.

Part 2 of my thoughts on the Orlando shooting… My thoughts and prayers are with all the families who suffered such terrible losses… And to all the victims, you will never be forgotten

While gymnasts are prohibited from performing shirtless at the Olympics, it would undoubtedly generate more viewers. After all, they’re “yoked” AF. Watch Leyva’s shirtless performance below!