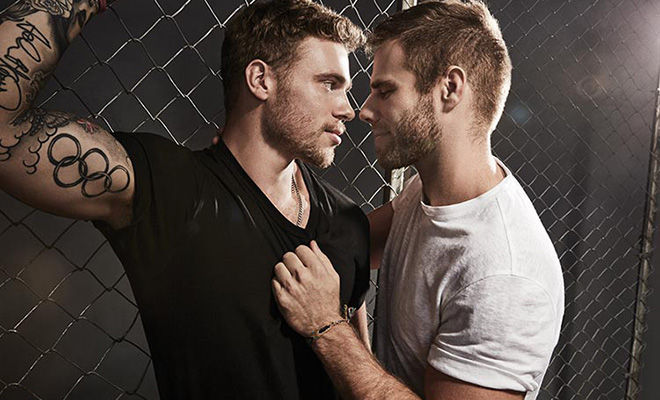 Gus Kenworthy (25) and his boyfriend, Matthew Wilkas (38), spoke with Out magazine for the publication’s upcoming Love Issue. In the Q&A, the adorable couple opened up about life before they met. Kenworthy revealed that he realized he was gay when he was very young, and that life in the closet was painful.

“I figured out I was gay at about the age of 5. If I was watching a movie, I was always fixating on the male lead and not the female lead. I found dirty magazines under my older brother’s bed, and I remember staring at the guy in it and thinking, ‘This is kind of crazy.’ My closest family friend was a girl, and I was always excited to go to her house and use her Easy-Bake Oven and play with her Barbie dolls — all the things I wanted to have, but I had Tech Decks and G.I. Joes. I remember asking my mom for a Barbie when I was young and my brother telling her, ‘You cannot get him Barbies.'” Kenworthy told Out.

He went on to describe life as a closeted teenager and his first relationship. “When I was in high school I realized, Oh, I’m really into guys and want to hook up with them, but that was not an option at all. I’d just turned pro in skiing, and I was traveling, so there were girls at events, and they’d get pushed on you, and it was hard to circumnavigate that. Then, when I was 18, I met my first boyfriend, Robin, who was also involved in the ski industry, working in film and photography.”

“He didn’t know he was gay, he didn’t know I was gay, and we became friends. Then, after a night of drinking, I decided to make a move. I set it up so that if he freaked out, I would just say, ‘I’m so sorry, I drank too much,’ but he reciprocated, and that was the start of a five-year relationship. It was completely in the closet — we presented ourselves as friends. We’d get hotel rooms with two beds when we were at ski events. He’d stay in another room at my parents’ house. It was sad.”

“I still haven’t really experienced that much sexually,” says @guskenworthy. “I wouldn’t want to ever sacrifice my relationship with Matt just to go out and get that out of my system, but we’ve also talked about that and he doesn’t want to deprive me of experiencing anything while I’m still young. I don’t necessarily know what that means. We’re not in an open relationship and we’re not breaking up. But we’re also not getting married.” Link to story and photos in bio. (Photography by @rogererickson. Styling by Julien Jesus. Prop styling by @stonecoldprops. Grooming by Mahfud Ibrahim for @xclusiveartists. Gus Kenworthy (left): T-shirt by @calvinklein, Matt Wilkas: T-shirt by @zegnaofficial.) #LoveIsLove

Kenworthy continued, “I never thought I’d come out while I was skiing. I was sure that my industry was homophobic, so I decided I’d have my ski career, and then come out to my friends and live with my boyfriends or get married, but it would be a separate thing. But I got to a point where the pain of holding on to it became more than the pain of letting it go.”

“It was damaging to be in the closet, damaging to not hold my boyfriend’s hand if we were in public, damaging to be thinking, Oh, my God, what does that other person think of me right now? That’s when I realized I was a wuss, and that I had to stand up for myself and let everyone know. Robin and I were on the rocks, and I just decided that if I was ever going to meet somebody else, I needed to be out.”

Despite the 13-year age difference Kenworthy and Wilkas seem to be incredibly happy in their relationship, but they’re not getting hitched anytime soon. Kenworthy stated, “All relationships take work, and we’ve definitely begun to realize that. I’m traveling and skiing and training and competing. He lives in New York — he can’t really live in Denver. Also, I was in a relationship from 18 to 23, and I still haven’t really experienced that much sexually. I wouldn’t want to ever sacrifice my relationship with Matt just to go out and get that out of my system, but we’ve also talked about that and, he doesn’t want to deprive me of experiencing anything while I’m still young. I don’t necessarily know what that means. We’re not in an open relationship and we’re not breaking up. But we’re also not getting married.”

If you’d like to read the Q&A in its entirety, head over to Out.