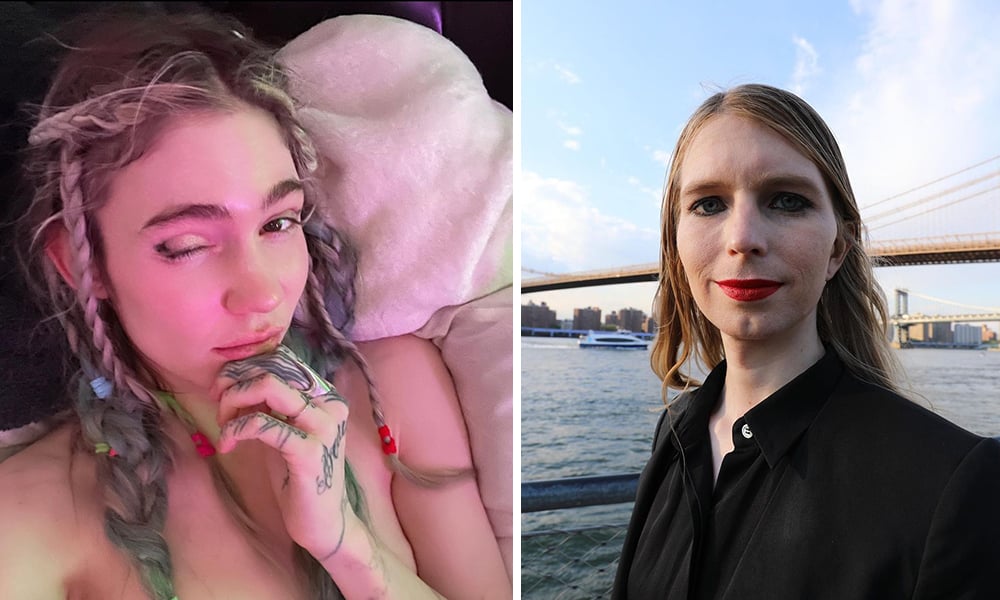 This has been a big week for Grimes fans.

If you haven’t been following the Grimes updates this past week, let us catch you up to speed. We began this year thinking that Grimes and Elon Musk were at least somewhat separated. Now there are reports that Grimes is dating trans activist and whistleblower Chelsea Manning. There’s a lot of ground to cover here, so let’s get into it.

Entrepreneur and serial bad-take Tweeter, Elon Musk, and Grimes began their relationship in 2018. The couple had their first child X Æ A-12 (which Grimes pronounces “X A.I. Archangel,” or X for short) in May 2020. X was Musk’s seventh child. The couple “semi-separated” in September 2021, but earlier this month Vanity Fair reported that Grimes said she would “probably refer to [Elon] as my boyfriend, but we’re very fluid.” However, the musician later clarified on Twitter that the two had broken up since the article was written.

Me and E have broken up *again* since the writing of this article haha, but he’s my best friend and the love of my life, and my life and art are forever dedicated to The Mission now, I think Devin wrote that part of the story rly well. Sique – peace out

This wasn’t the only surprise to emerge from that Vanity Fair piece. It was also revealed that the couple had a second baby via surrogate in late 2021. Her name is Exa Dark Sideræl Musk and she goes by the nickname Y. The surrogacy arrangement kept the whole thing under wraps, as Grimes was very clearly not pregnant at the end of last year.

Now, if you can believe it, the plot thickens even more. Page Six is reporting that Grimes is now dating Chelsea Manning. An anonymous source told the publication that they’re “getting serious,” and that they “U-Hauled it.” The source went on to say that “they’ve been living together in Austin,” despite Manning still having her apartment in Brooklyn.

The story appears to be somewhat corroborated Grimes’ and Manning’s recent interactions on Twitter. They have had some back and forths, with Grimes saying that she has been “taking [Chelsea’s] word as final these days.”

Perhaps unsurprisingly, the response to this news has been chaotic.

grimes is back with elon!
me: okay
grimes has a secret baby!!
me: what
grimes broke up with elon!!!
me:
grimes is going out with chelsea manning
me: pic.twitter.com/Z2z65oxckt

I don’t know about you, but my head is spinning.