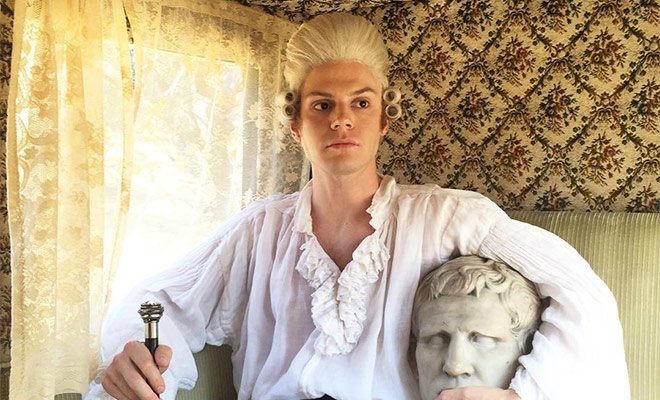 Fair warning: If you keep reading, you’ll inevitably wander into a surplus of spoilers.

For those of you that don’t know, fans had speculated that Peters’ character was the producer behind the camera during the “real life” scenes; throughout the season you hear a male voice during the interviews.

Thanks to Murphy, Falchuk, and all 2.1 milli of you who made it possible for me to wear a powdered wig. Love you guys ? ? @johnnygray5

Although Mott has only been in one episode, we know a lot about his past. First, he’s an ancestor to Gloria (Frances Conroy) and Dandy Mott (Finn Wittrock) from the show’s fourth season, Freak Show.

Mott was formerly married to a woman and had an heir, but he ditched them and relocated to North Carolina to be with his servant/lover Guinness (Henderson Wade). He’s the original owner of the Shaker mansion, which was apparently built by Shakers in 1792.

This was ENTIRELY unexpected but surprisingly so hot. You slayed me, @tweetsonurface! #AHS #AHSRoanoke pic.twitter.com/zqlTZkrIXS

As the story goes, Mott constructed the estate and its secret tunnel system to store his priceless collection of artwork, which he loved more than anything or anyone.

“The art never judges. I envy it. Life in two dimensions. Frozen in forever beauty. To watch the world go by unencumbered by the gossip and the pain of three-dimensional men. I love them, you know? The paintings. Even more than I love you.” Edward Morr (to Guinness)

Mott and his flock of servants had only lived on the property for a few days before The Butcher (Kathy Bates) destroyed his art collection.

Obviously, he blamed his staff and punished them mercilessly. Mott stripped them of their clothing, locked them in a cellar and gave them one apple core to share as a penalty for destroying his art. Unfortunately, he didn’t live long enough to release them from the cellar, so the slaves withered and died in the pit.

The Lost Colony eventually captured Mott and then skewered and roasted him on fire — it wasn’t a pleasant death. Guinness, his hapless lover, escaped and told the police what happened, and they arrested him for murdering Mott.

The negotiations are over. #AHSRoanoke

Ok, now that we’ve reviewed the backstory of Peters’ character, we can talk about the ridiculously hot bathtub scene in which Mott and Guinness make out before rouging each other’s nipples, which was apparently popular foreplay in the 18 century particularly in France.

Although Mott doesn’t survive the episode, his ghost makes an appearance near the end of the episode. Hopefully, this isn’t the last time we see Peters in this season of AHS.