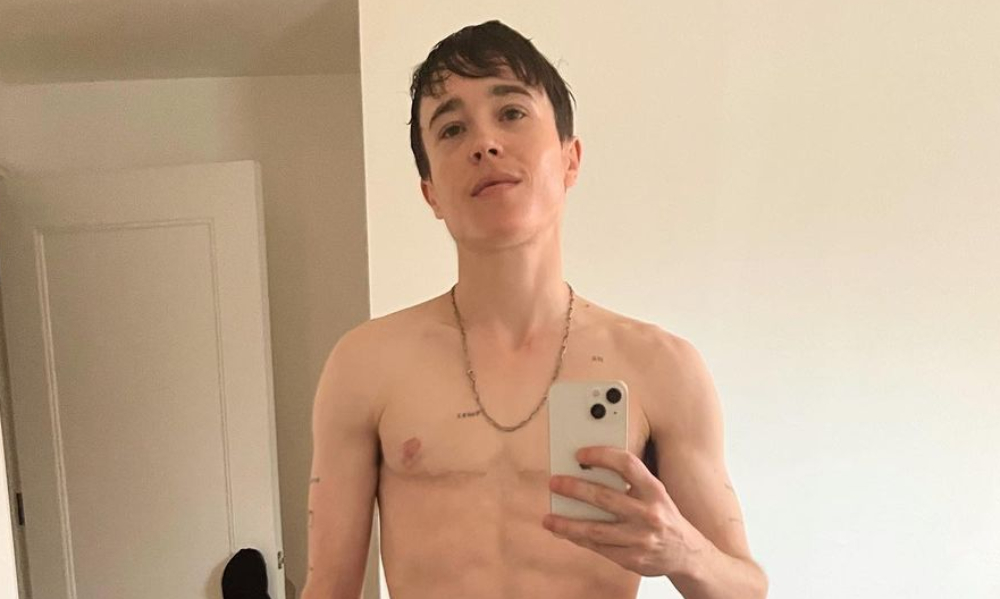 Elliot Page posted a shirtless selfie on Instagram and fans showering him with support.

Elliot Page took a moment to show off his chest on Instagram. Page, who underwent gender-affirming surgery before coming out as trans last year, posted a shirtless selfie on Instagram on Sunday, November 28.

While snapping the mirror selfie, the 34-year-old actor sported a pair of black sweatpants and a simple chain. Page shared a cute note in the caption, writing, “Oh good, my new phone works.”

Page came out as transgender on December 1, 2020, writing an emotional letter on Instagram to share the news with the world. He received an outpouring of support after coming out. He thanked fans for their support weeks later and just days before the holidays, calling their love “the greatest gift.”

Related | A Brief But Thorough History of the Word “Transgender”

Page, whose pronouns are he/they, shared the first public moment of his journey earlier this year. After coming out as transgender, Page posted a shirtless photo on Instagram at the end of May. The photograph showed his first time swimming in men’s swim trunks and marked the first shirtless photo he shared of himself publicly after his top surgery.

In March, Page interviewed Time magazine to share coming out and express joy in having the chance to “fully become” himself. He described his mental state as, “This feeling of true excitement and deep gratitude to have made it to this point in my life, mixed with a lot of fear and anxiety.”

The following month, Page sat down with Oprah Winfrey for a lengthy discussion as part of the “Oprah Conversations” series to discuss his coming out and the phases of his transition that brought him happiness. While answering Winfrey’s questions, Page became emotional, trying to convey his answer.

“It’s the little things … getting out of the shower, and the towel’s around your waist, and you’re looking at yourself in the mirror, and you’re just like, ‘There I am.’ And I’m not having the moment where I’m panicked.”

He continued explaining his sentiments, saying, “I’m not having all these little moments that use to be … just being in a t-shirt. It’s being able to touch my chest and feel comfortable in my body, probably for the first time.”