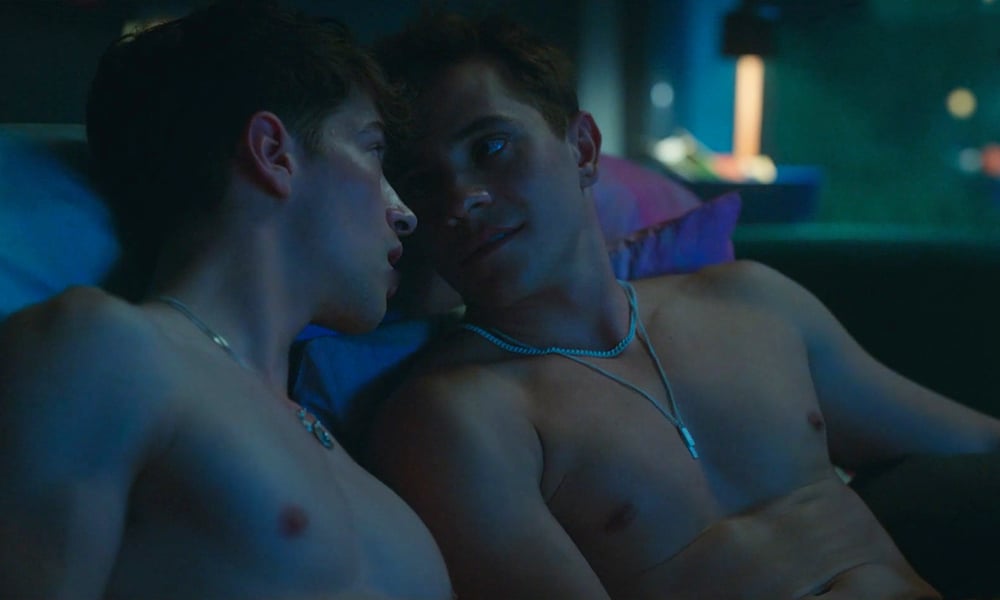 Elite Star Tells All About His Bulge, Says ‘Everything is Mine’

Something LGBTQ+ has been happening on Netflix, and we’re not talking about Queer Eye. Season 5 of Elite is as faithfully queer as previous seasons, but this season has one thing the others didn’t. André Lamoglia. And with Lamoglia also comes his bulge. It’s a package deal.

Lamoglia plays Iván, who enters Las Encinas full of that golden-retriever type of energy. He immediately takes a liking to the twins Patrick and Ari, surprising himself when he recognized his feelings for Patrick. Although he attempts to deny his feelings for Patrick, and initially maintains that he’s straight…well, we won’t go into too much more detail.

Getting Intimate on Elite

Needless to say, this is Elite, so unsurprisingly the scenes get quite intimate. Lamoglia recently went on a press tour for the season where he spoke about the sex scenes he filmed with Patrick (played by Manu Rios). “I’ll be honest. Before I got to Spain, when I got cast, I was worried about filming those scenes,” said Lamoglia. “Mainly because I’ve never done a scene like that in my career before. So I kept thinking about the logistics of how it would be done.”

Luckily, a combination of on-set professionalism and a good relationship with his co-star made it easier. “After I arrived here in Madrid, it was much more relaxed than I imagined,” said the Brazillian actor. “When we film the scenes, the team is reduced onset. We have an intimacy coordinator, precisely for those scenes, to make us more comfortable, more prepared, to bring more truth to the scene.”

The actor also spoke a bit about his on-screen nudity, saying he “didn’t do any scenes completely naked. We had protection, a sex cover. They call it a thong or a sock, something like that.” The actor maintains that he felt really comfortable, and taken care of. His job was also made easier with the help of Manu Rios. The pair are now friends outside of work on the show. “The fact that we get along is great for the series and the scenes because you already have a certain intimacy, a certain chemistry.”

His friendship with Rios is not the only authentic thing about his portrayal of Iván. It turns out Lamoglia is the complete package, despite rumors that he’s been stuffing his underwear. “Everything is mine! All mine,” he assured. Do with that information what you will.

Season 5 of Elite is available to watch on Netflix now.

Elite Star Tells All About His Bulge, Says ‘Everything is Mine’