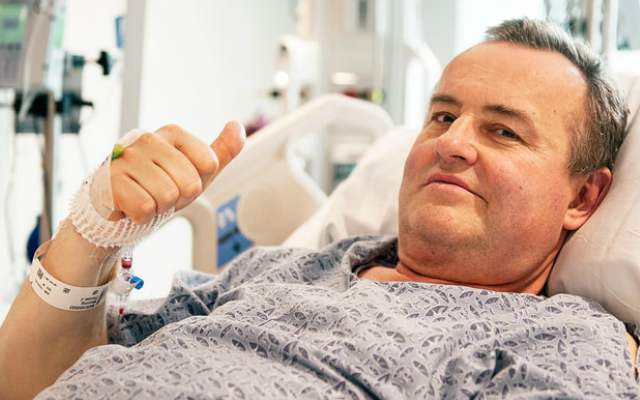 The first ever penis transplant in the U.S. happened this week at Massachusetts General Hospital, and it was ridiculously successful. In fact, doctors called it a “landmark procedure,” reports CNN.

The lucky recipient of what is called a gentitourinary vascularized composite allograft, or GUVCA, is 64-year old Thomas Manning, who had his penis amputated after being diagnosed with penile cancer in 2012. He’s recovering well after the 15-hour long debacle of a surgery. Here’s how they did it:

In order to make the penis work properly, surgeons had to connect the intricate vascular and nerve structures of a donor penis with those of Manning’s. In essence, the objective was primarily to reconstruct the genitalia so that it appeared natural, followed by urinary function and hopefully sexual function.

While Manning is healing, there is no sign of bleeding, rejection or infection, and doctors are optimistic everything will be smooth and run according to to plans.

“We are hopeful that these reconstructive techniques will allow us to alleviate the suffering and despair of those who have experienced devastating genitourinary injuries and are often so despondent they consider taking their own lives,” said Dr. Curtis L. Cetrulo, a plastic and reconstructive surgeon who led the transplant team with Dr. Dicken Ko, director of the hospital’s Regional Urology Program.

The basis behind the GUVCA took nearly 4 years to build and construct, based on previous work. Manning will have to take immunosuppressing drugs for the rest of his life to diminish any chance of rejection.

Eventually, the team hopes the procedure can be used with gender reconstruction surgeries as well.

“Today I begin a new chapter filled with personal hope and hope for others who have suffered genital injuries, particularly for our service members who put their lives on the line and suffer serious damage as a result,” Manning said in a statement.

Related: Man Pumped 10 Pounds of Silicone into His Unit

The first penis transplant to ever have been done was a nine-hour operation at Tygerberg Hospital in Cape Town, South Africa, according to CNN. The patient was a 21-year old man whose penis was amputed after severe complications from a circumcision. The surgery was an overwhelming success, and the patient got his girlfriend pregnant soon after (no word on whether his new penis has foreskin).