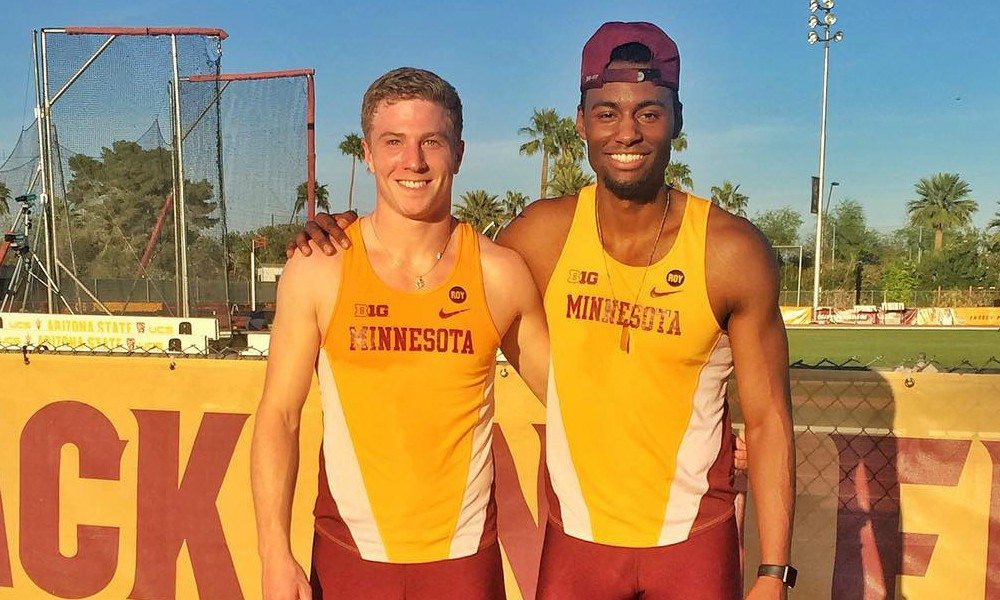 “I thought I could abolish the gay in me by excelling at sports.”

Justin Rabon and Brad Neumann run track at the University of Minnesota. In addition to being teammates, these fast fellas are also boyfriends, and they have been together for more than two years.

In 2014, Rabon and Neumann fell in love over Thanksgiving break. At the time, the athletes attended different colleges but had been friends since high school. They met after racing against each other at track meets in Wisconsin.

After finding his courage, Rabon nervously came out as gay to Neumann, who responded in the best possible way — he came out as gay, too. Shortly after coming out, they started dating and quickly fell in love. The experience made it easier for Rabon and Neumann to come out to their friends, families and teammates.

To celebrate Pride Month, Rabon and Neumann wrote essays about their adorable love story for Outsports.

After becoming boyfriends, Rabon transferred to Minnesota to be closer to his boyfriend. “I decided to start everything new and not be this secretive person, so the friends I made knew everything about me from the get-go,” Rabon wrote. “I couldn’t go through the feeling of being someone other than myself any longer.”

“I’ve just realized that people can see through a facade if you are putting one up, and once the real you is able to be seen, everyone will notice and nothing can stop you.”

In Neumann’s essay, he revealed that he used athletics to hide his sexuality. “I thought I could abolish the gay in me by excelling at sports,” he wrote. “In part, it did the trick: Every medal I won transformed anyone’s thoughts of me being gay into an affirmation of me being straight.”

It was the homophobia in the locker room that eventually motivated Neumann to open up to Rabon. “We would talk for hours [on the phone] about everything, each of us being 100 percent ourselves for the first time in our entire lives,” Neumann continues. “I love my family, friends and teammates, but they cannot relate to the things closeted gay athletes go through.”

In an interview with USA Today, the couple discussed their decision to share their story with the world. Their goal is to break LGBTQ stereotypes, inspire others to live authentically and to snuff out homophobia in sports.

“I think having them personally know me has changed their views,” says Neumann of his teammates. “And now, when they go around to the next person who doesn’t believe someone who is LGBT should have the same rights, they’ll say, ’actually, I know Justin and Brad.’ It’s about changing minds like that.”

“It’s so important to get to know all types of people,” Rabon says. “You can’t generalize [people]. That’s how bigoted people are.”