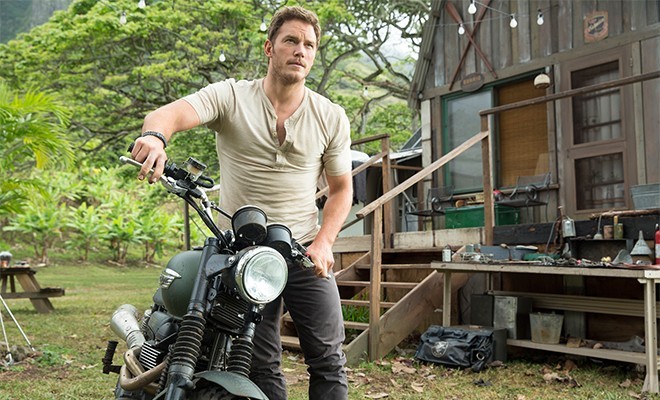 If you’re like us, you can’t wait to see beefy Chris Pratt kick some prehistoric ass in Jurassic World. In a recent interview with GQ, Pratt dished on his new film and talked about his affinity with nudity. Wait, what? That’s right! Pratt likes to be naked … a lot. In the interview, Pratt told GQ:

“I was a jokester, I had a dirty mind, and a dirty sense of humor. And I was naked a lot. I was naked all the time. It was just recently, in the last few years since I’ve become an adult, that I’ve learned to keep my clothes on. And even then, I really haven’t. I got yelled at by NBC for getting naked. [While filming multiple takes of a Parks and Recreation scene in which he was supposed to shock Amy Poehler by being naked in a doorway, in one take he did it for real.] I got suspended from the track team in high school for getting naked on the track bus. I was always getting naked. I thought it was hilarious. I didn’t understand how somebody could be so offended by me just taking my junk out.”

Apparently, NBC wasn’t a fan of his public indecency, and reportedly requested that he his T-Rex back in its cage.

“They did—they sent me a letter. HR sent me a letter. Someone obviously must have complained about it or something. I guess now that I don’t work for them, I can make fun of it, but part of the letter was saying, like, ‘Also, don’t mock this. Just so we’re clear, you’re being reprimanded, and don’t go around talking about how this is funny.’ [It was] the take they fucking used, by the way, that made the air, and was hilarious, so I was totally right, but apparently if you want to get naked there’s certain protocols you have to take to prevent people from being offended—you have to give them the opportunity to not see it. But that’s how I was in high school, too. I remember walking into the coach’s office with just a sock on. Not on my feet. And I was like, ‘Hey, Coach, can I talk to you?’ And they were like, ‘Jesus, God!’ ” He grins. “I liked making people feel uncomfortable.”

For the full interview, head over to GQ