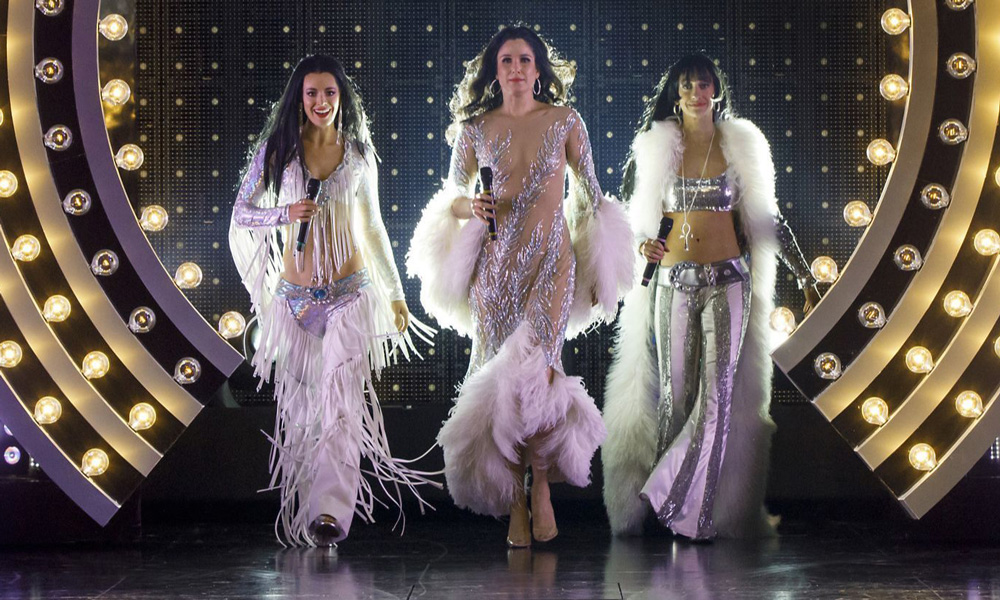 Los Angeles (Variety.com) – The new jukebox bio-musical The Cher Show captures a good amount of the vibrant personality and genuinely admirable perseverance that make Cher the ultimate celebrity survivor. But like Cher herself, the show careens from career to career without a consistent thrust other than awesome attitude. In its pre-Broadway version premiering in Chicago, The Cher Show sings but doesn’t soar, and seems likely to appeal primarily to the most adoring of her admittedly enormous fan base, suggesting a commercial trajectory more in line with On Your Feet than Beautiful.

In the book by Rick Elice (Jersey Boys, Peter and the Starcatcher), the show opens with a scene where the mature Cher (Stephanie J. Block) decides to change the opening number of a fictional variety show about her own life. In conversation with her two younger selves (Micaela Diamond, who will fall in love with Sonny Bono; and Teal Wicks, who will leave him and marry Gregg Allman), Cher decides to turn back time, taking us to a stylized sequence where a young Cher is comforted by her mother (Emily Skinner) after the kids at school call her a half-breed (leading to a truncated version of the song). Her mother charges her with “becoming someone” and embracing what makes her different, which unfortunately remains about the level of thematic vagueness throughout. The story gets going for real when Cher meets Sonny (Jarrod Spector), launching them both into a whirlwind of fame and hit songs, finally settling into a full-length version of the still-adorable “I Got You Babe.”

The first act follows Cher’s romance and marriage to Sonny, characterized here in an excellent performance by Spector (Beautiful) as a complex figure alternately brilliant, loving, jealous and controlling, particularly as it relates to his 95 percent ownership of Cher Enterprises (the other 5 percent going to a lawyer). Elice depicts Cher’s battle to leave him at the height of their television variety-show success by having the youngest Cher argue for staying, the older one argue for leaving, and the middle one making the decision. The three Chers populate the stage simultaneously throughout, reflecting not just different eras but different shades of personality, from naive fun to rebellious independence to confident diva-dom.

With Sonny and Cher split up, though, the second act struggles to find its narrative throughline. We see Cher with her own variety show, her marriage to an adoring but ill-suited Allman (Matthew Hydzik) , the birth of her second child, and another variety show with Sonny. Then Block takes over and we move to Cher’s acting career. The last we really see of the conceptual variety show frame is a fun, extended sequence of “The Beat Goes On,” performed by Diamond and with a lot of fun retro choreography by Christopher Gattelli, which serves effectively as a means of narrating Cher’s tribulations in film from an initial laughing stock to Oscar-winner. We then follow Cher into her relationship with the much younger Rob Camilletti (Michael Campayno), who can’t handle the taunts of the paparazzi.

Related | A Cher Musical Is Most Definitely in the Works

The real star of the show, though, turns out not to be the stars of the show, nor the music, but Bob Mackie’s costumes (he is both the show’s designer and a character), many simply the fantastic fashions he created for Cher throughout her career. They inject needed drama and flash and performative excitement, and generate by far the biggest audience reaction when carefully revealed by director Jason Moore.

@TheCherShow debuted in #Chicago for its pre-Broadway run! Did you know Bob Mackie, @Cher’s original costume designer, created the wardrobe for the show? ? #Cher #TheCherShow #Broadway

But costumes can carry a show only so far. And here’s the tricky thing: what’s good about this show also happens to be what’s not great about it. It’s funny but not that funny, clever but never interesting, and although it depicts Cher’s ability to go bigger and bolder, the show itself maintains a respectful tameness. Once the variety show aspect fizzles out, we’re left with too much empty contemplation. (Of love, Cher’s mother finally concludes: “I hope you find it.”) Cher’s constant comebacks don’t feel very inspirational when we see only the highlights — skipping, for example, all mention of those 90s infomercials, which are exactly what Cher had to come back from.

The performers playing Cher are all strong and all capture that unique husky sound, but it very rarely feels like they have an opportunity to let loose and have a blast. Even the song “Believe” — Cher’s later-in-life chart-topping dance hit, which gets repeated in fragments probably a half-dozen times — is forced to carry odd dramatic weight. Yes, Cher really believes in life after love; we get it. Can we have more fun now?