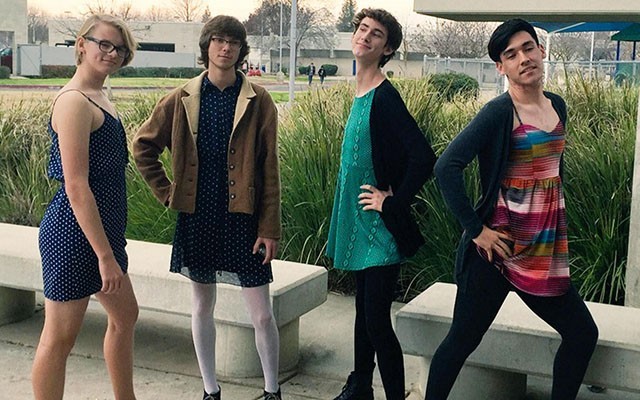 Man, you look good in that dress.

The current dress code forbids boys from wearing earrings or having long hair, and the amendment would extend those standards to girls.

To protest the new code, the students flip flopped — the boys sported dresses and the girls kept it classy in collared shirts. Emma Sledd, a senior at Buchanan High School, told the Fresno Bee “Our district’s dress code should not favor or discriminate any gender. We believe everyone should be able to express themselves equally. A boy with long hair is no less of a hard worker than a girl with long hair.”

Sledd added “The reason we switched gender norms for the day was to make a statement that what we wear does not define us as students.”

While the issue might seem insignificant, students believe they’re being forced into gender stereotypes, and they aren’t alone. Attorney Abré Conner spoke candidly about the classroom conflict. “When schools require certain hair length only for boys, or say girls can wear earrings but boys cannot wear earrings, they discriminate and prevent students from learning in an inclusive school climate.”

Throughout the ordeal, the students learned a thing or two about our society’s influence on gender roles. They petitioned against the proposed amendment to their dress code requesting “no restrictions on hair length, facial hair and piercings.”

Unfortunately, the board of trustees passed on the students’ proposal, which they believe would have been detrimental to the students. One board member commented on their decision saying, “We shouldn’t be changing things. A woman’s a woman and a man’s a man, and there’s a difference.”

Sometimes, we forget how far we’ve come, and this is a good indicator how far we have to go. Good luck to the students in Fresno, and keep challenging traditional ideology — you’re the future.