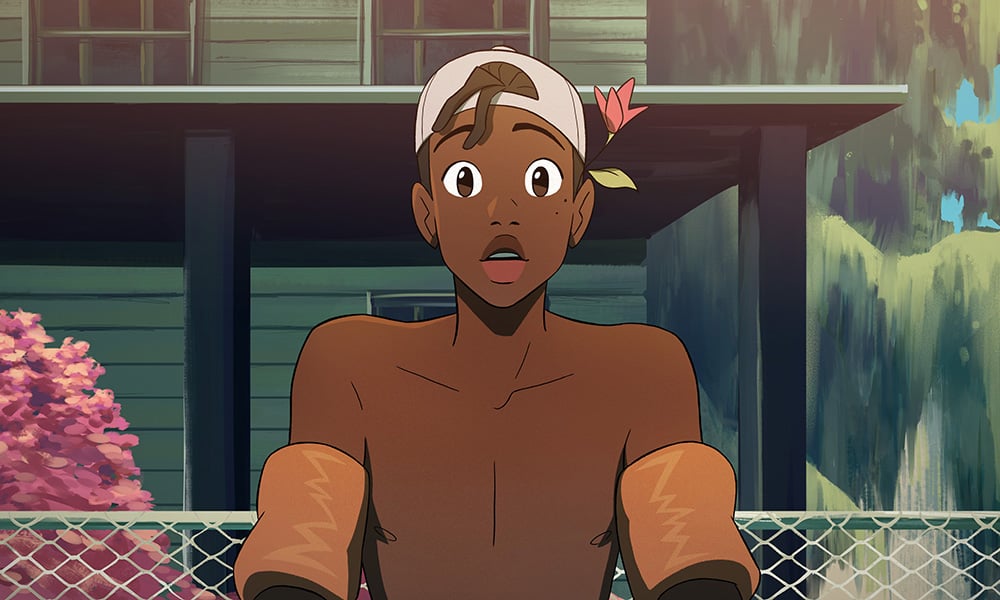 Jay stands at the edge of the pool and worries over whether he has what it takes to make the leap. To face his fear and dive into the water.

The team behind Pritty, an upcoming animation, had to take a leap of their own in the face of the COVID-19 pandemic.

They initially set out to make a live-action film, but with production forced to a halt because of the pandemic, they decided to take a chance and reimagine the story as an animation.

Directed by Terrance Daye and based on the novel written by Keith F. Miller Jr., Pritty follows the story of Jay, a Black teen who “steps out of his comfort zone, and overcomes his fear of the deep end.”

The film’s synopsis reads, “Savannah, Georgia (early 2000’s) backdrops this naturalistic coming-of-age story. The Deep South breeds its Black boys hard, and then there’s Jay. He sticks out for all the wrong reasons. He’s dark-skinned, quiet and skinny, and likes to wear flowers in his hair. The opposite of his masculine and charismatic older brother, Jacob. Their differences peak at the community pool, where swaggering manhood is on full display. Jay is reserved as he struggles to embody his brother’s carefree confidence. Until he gets help from Justin, a charming, light-skinned boy from the neighborhood, their new friendship is tested, however, when an unspoken truth dares to surface.”

Though the film suffered a delay, the creators were persistent that this is a story worth telling. It aims to fill a gap for animated storytelling centered around Black queer characters.

“There are too few stories that simply feature black boys at play, discovering their full humanity and vulnerability—and learning to heal because of it,” said Daye in a statement. “I longed for my own work to engage more intentionally in this practice. I changed my perspective on filmmaking and committed to bringing a new question to the big screen: ‘What would it mean to visualize the softer, more intimate sides of black men without fear of consequence?'”

After pivoting to animation, Pritty developed a new motto, “bring Hayao Miyazaki to the hood.” Hayao Miyazaki is a Japanese animator and co-founder of the infamous Studio Ghibli. This animation studio provided films like “Spirited Away” and “My Neighbor Totoro.” His work became the source of inspiration and sparked the desire to bring diversity to beautiful landscapes and imagery.

To help bring Jay’s inspiring story to life, you can donate to the team’s official Kickstarter page. They hope to meet their stretch goal of $125,000 by April 1. You can find a sneak-peek of the film, including the heartfelt moment when Jay and Justin meet, on the page as well.

Back Pritty on Kickstarter here.