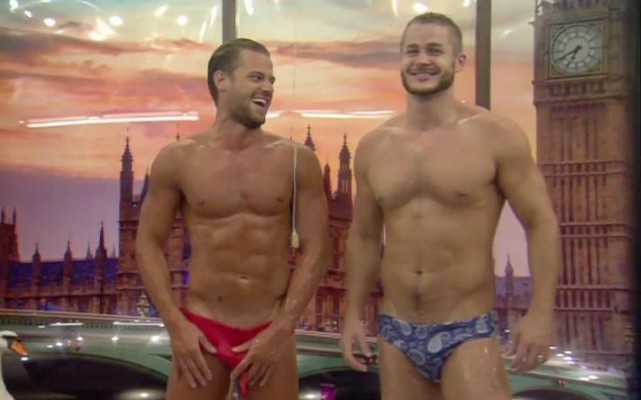 Remember Austin Armacost? He’s one of the “stars” (if you want to call him that) of A-List New York (that show about tragic queens desperate for fame?) and Marc Jacobs ex-boyfriend. Although he’s one of many male stars to bare it all, somehow he’s trashier. Currently, Armacost is a contestant on Big Brother UK (if anyone cares) and he’s thirsty for the “D.” In recent episodes, Armacost and his housemate James have been close. Like, really close.

On several occasions, the boys have engaged in a beautiful bromance that involves bathing each other and sleeping in the same bed (sin clothing). Recently, Armacost complained of sore hamstrings and asked his bed buddy to give him a rub down. In the process, he arched his back and showed off his tush for the entire room.

At one point, he rolled over and showed off his sack, which looks more like a wad of gum than balls. Any who, as you can tell by these photos, the boy’s desperate for some action and it seems like he wants to be on bottom. In one of these photos, Armacost (who’s probably has a smooth bottom) appears to hand James some lotion for … you know massaging.