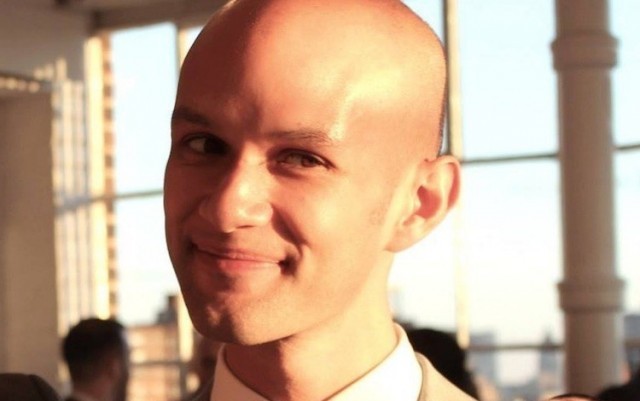 When openly gay writer Patrick Bradley‘s antigay parents refused to attend his wedding, he penned a lovely letter. As the founder of TheGayFoodie.com, Bradley’s an exceptional writer, so when his parents skipped his wedding, he wrote a letter.

He addressed the letter to his parents and sent it to his entire family in hopes of telling his side of the story.

It’s been 890 days since the day that you both decided not to partake in my wedding. I don’t know why it’s taken me this long to say anything about it. Perhaps I’ve been afraid of what the family will think, what the family might say. Or perhaps I’ve been afraid of losing even moreof my wonderful, beautiful family, whom I think about day and night.

But the time is now because I’ve finally grown too tired of the 890 days and nights of being haunted by your presence—by your lack of presence, to be more precise. I’m tired of night after night of dreaming of you. And tonight, I had the most unpleasant of dreams—one that jolted me from my sleep and disallowed me to return to it. So at 6:22 a.m., after little more than three hours of sleep, I’m writing this letter to you—knowing that it is taking from my opportunity of getting a full night’s rest before work; but I’d rather work on little sleep than on little dignity.

As not to keep anyone in the family excluded (any longer), I’m sending this letter to everyone involved. I want everyone to know what had happened on my last visit to you, before my beautiful, wonderful wedding. I’m not writing this letter in an act of vengeance (even though it feels like it is), but rather, I’m doing it because I’m tired of walking on eggshells around my siblings, godchildren, nephews and nieces. I’m tired of having to be “civil” with both of you, “for the sake of the family.” I’m also tired of the unwanted holiday and birthday gifts, and I’m tired of you having the audacity to speak to my husband (and myself) as if nothing has happened. Have you no shame?

I think it’s time that I told my side of the story to the family, as I’m sure you have already told yours. I want everything to be out in the open, so that I can feel like I have all of my dignity with me when I will undoubtedly see you at family gatherings—gatherings which I now would rather avoid if it means that either of you will be present; I have other ways of seeing my family.

On May 13, 2013, I made the trip out to New Jersey—the day after Mother’s Day—to take you out for lunch because I had to work the previous day. You picked me up at the train station and we stopped at A & P to pick up a birthday card for one of the boys. On the way there, I told you about how Michael’s extended family, who’d be traveling from Georgia,  Colorado and beyond—in part to meet you!—were so excited about meeting you. You simply replied that you both would not be going to the wedding. I tried my best to retain composure, thinking that I’d be able to change your mind before the big day.

By the time we left A & P, you started citing the bible, while unsuspecting shoppers were bustling about us, running their afternoon errands. And by the time we got back to the car, you’d mentioned your fear of an angel appearing to you, saying, “Stop praying for Patrick! He’s already in hell!” I knew then that it was time to go to my last resort and give an ultimatum which I never expected would be fulfilled.

I explained to you, simply and calmly, that if you (both) did not attend my wedding, you would not see me again after the wedding: no holidays, no birthdays, no hospitals, no funerals. What I heard next put me into a state of mild shock. You followed up, quickly and readily, with, “We know that! I talked to your dad last night and we already accept it! We said that we give you back to God!” I recall other things being said, which I’ll omit here. As I sat in shock—shock that you would rather never see me again than attend my wedding—you simply moved onto your next subject: “Well, I guess you don’t want to go to lunch anymore.” As I opened the car door to walk back to the train station, you offered, “Let me drive you back to the train. Let it be the one last thing that I do for you.” If there was any doubt in my mind that I’d misunderstood what you’d said to me previously, you had clarified your intentions then and there.

Mom and Dad: By not attending my wedding, you rejected me, and you rejected my husband, who is my own immediate family. I, in turn, reject anyone that rejects my family—out of dignity and respect for it. But I am offering resolution.

I will forgive you both for what you have done, if you, in front of theentire family (from youngest to eldest) admit that what you both did was wrong; admit that you both should have been at the wedding. Because I do think that what you both have done is shameful. You’ve torn a family apart. But what breaks my heart most is what this has done to the youngest in the family—the ones who were too young to know, or too young to understand what was going on. The ones whose only conclusion was perhaps “Patrick must be bad” or “He must have done something wrong because Grandma didn’t go to his wedding.” That is where I think you both should bear the shame, not me.

I want everyone to know everything. And maybe tonight, I’ll finally be able to sleep the whole night through.