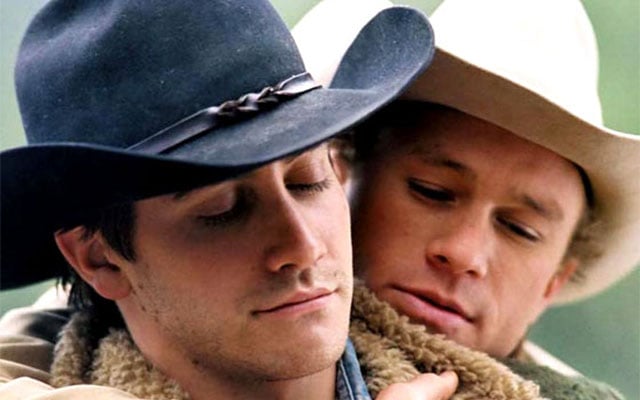 In 2005, Jake Gyllenhaal and Heath Ledger starred in Ang Lee’s “gay cowboy” movie, which brought a queer love story to the big screen. After more than 10 years, Gyllenhaal opened up to The Hollywood Reporter about his relationship with Ledger and their experience on Brokeback Mountain.

At the end of the interview, reporter Stephen Galloway asked, “It’s still hard for a movie star to be gay. I mean, if you’re going to be a character actor, it’s one thing. When will that change?”

“You’re asking me? [LAUGHTER] When will that change? Look, I mean to ask, I think, when a lot of things will change? I wish I had that answer. I mean, I think it is changing, first of all.  And it’s pretty amazing how it’s changing.  And one of the things that I’m so proud of, in terms of being in that movie, was to see how, within the past basically 10 years, how much has changed. You know. When the Supreme Court passed just a little while ago, I felt like we had been part, a little part and parcel of that movement.

You know. My parents taught me as a kid: do your work. Do it well. Try as hard as you can, whatever it is. It will one day, for the long [run], it will make some sort of change somewhere. You know, that happened there.  It was so deeply moving to me that day [when the Supreme Court gave a ruling in favor of gay marriage] when my mother — I remember I was at Little Shop of Horrors.

We were in rehearsal. I was freaking out, because we had like six days of rehearsal and four performances. It was a staged reading, and it was like, I didn’t know what I was doing.  And we were in rehearsal and my mom sent me the decision. And she just said, ‘Sometimes love does win out,’ I remember.  And I was just super proud.  I mean I was proud, you know? To me that’s really a pretty incredible moment.  We had to wait a little while for it.  But when will it be OK for an actor to be gay? I mean, it’s OK now.”

Brokeback Mountain was a box office success that earned three Academy Awards and brought a queer love story to the big screen in an unprecedented way.