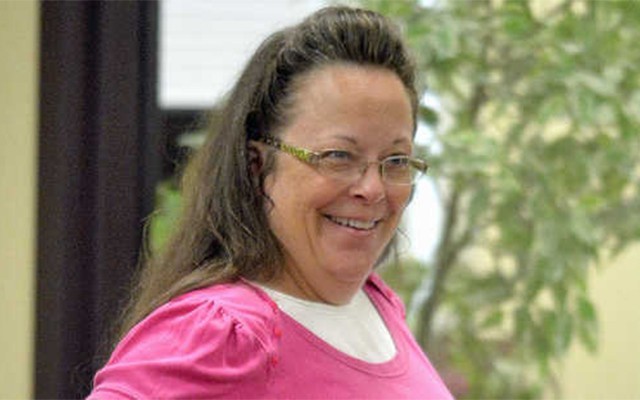 Kentucky anti-gay clerk Kim Davis of Rowan County is about as homophobic as you can get. As you know, she refuses to issue marriage licenses to same-sex couples despite the pushback from the Supreme Court of the United States (SCOTUS). After SCOTUS ruled against Davis, she invoked “God’s authority” (whatever that is) and continued to refuse marriage licenses.

According to Mat Staver, the founder of the law firm representing Davis, “She’s going to have to think and pray about her decision overnight. She certainly understands the consequences either way.” At this point, she needs to pray a lot; she could wind up behind bars.

According to the Associated Press, Rowan County Attorney Cecil Watkins is charging Davis with official misconduct, based on the notion that anyone who “refrains from performing a duty imposed upon him by law or clearly inherent in the nature of his office.” Concisely, if she doesn’t issue marriage licenses soon, she could find herself in jail with a cellmate named Wanda poking her with a toilet brush.

Recently, a group of protestors gathered in the anti-gay clerk’s office and demanded that she “do her job!” It’s as simple as that. Do your job or step down, have a good cry and pray you find a new job soon. Watch the video below!