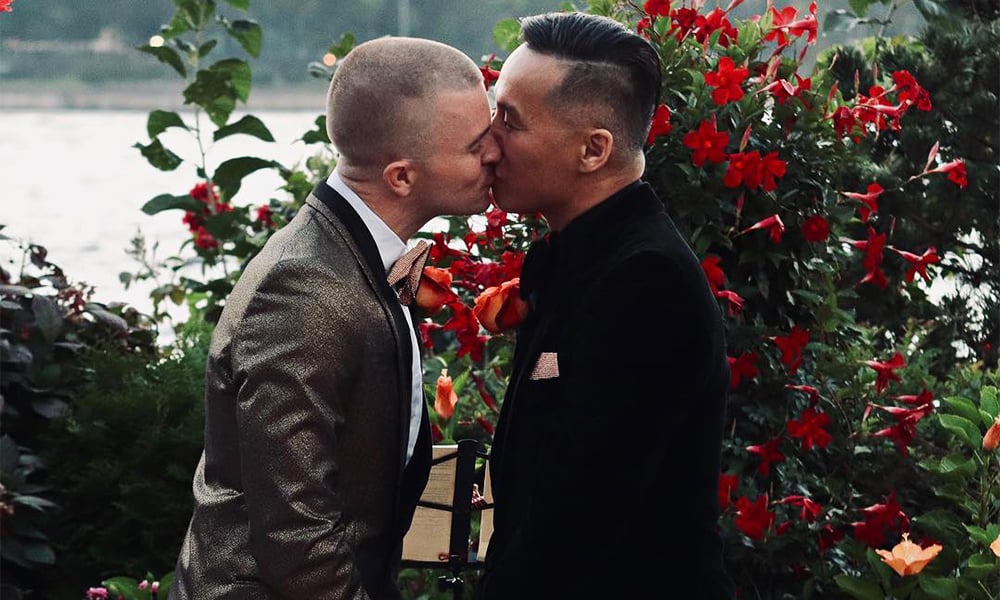 After dating for nearly nine years, BD Wong and his now husband, Richert Schnorr, got married in front of 250 guests. The ceremony, which was officiated by Sheera Ben-David, was held on Sunday at Giando on the Water in Brooklyn.

Wong, 57, and Schnorr, 35, cleverly avoided a “bride’s grand entrance” by appearing at the altar together and at the same time. Schnorr wore a gold lame Hugo Boss dinner jacket, and Wong sported a vintage black velvet three-piece suit from his wardrobe for his guest appearance on American Horror Story: Apocalypse.

The lavish ceremony played out against a breathtaking backdrop of the Manhattan skyline. Wong’s brother, Brian, later stated, “It was as if Howard planned it,” referring to Wong’s role as the assistant to the wedding planner, Howard Weinstein (Martin Short), in the film Father of the Bride.

Schnorr took to Instagram to share pictures of the adorable couple at their ceremony and to thank their guests for attending. “It really kinda is the happiest day of your life,” he wrote. “Thanks to my family and friends for the love and words and support and dance moves.”

It really kinda is the happiest day of your life. Thanks to my family and friends for the love and words and support and dance moves. Thanks to @msanamatronic for the grooves. Thanks to @kealasettle for the pipes. Thanks to @liachangphotography for the 📸 Thanks to @wongbd for loving me #schwong