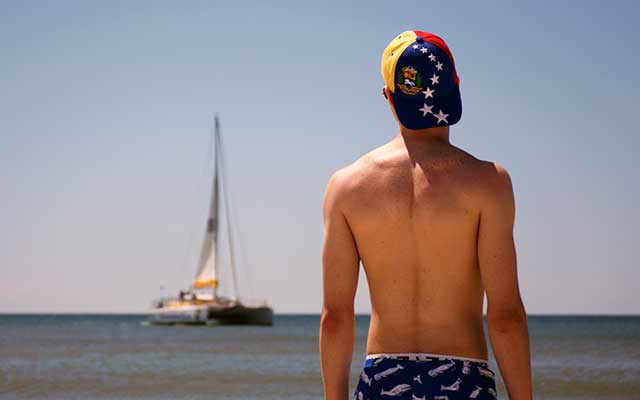 It’s summertime, baby, and us single gays need R&R outside of West Hollywood or San Francisco (sorry not sorry).

Don’t get me wrong. I love me a nice gayborhood paradise, but single gay guys don’t want to be in a crowd full of couples. We want to be where the action is, and more importantly we want to broaden our horizons beyond America, and summer is the time to do it.

There are many wonderful cities in the world and a lot of them are underrated. I’ve visited many of the places on this list, so I know firsthand, but there are others in which I know a lot about from people who live there as well as people who’ve visited. Like you, I daydream of dipping my toes too!

I don’t know about you, but I want this summer to be memorable. So, whip out your calendars — it’s time to book a gaycation!

I left my heart in Venice when I visited two summers ago. I happened to be there for gay pride 2014: The city’s very first gay pride parade, and boy was it worth it.

I even had a few flings during my stay, and they were all straight from a romance novel. The city is gothic and romantic, partly because there aren’t any loud banging clubs bordering its canals. Sometimes it’s creepy, but when you’re hand-in-hand with a sexy Venetian man, all alone in a candlelit ally way, the world vanishes.

Sometimes, in the summer, it gets humid — so be sure to bring shorts. The culture in Venice is very bohemian, which by its very nature has lots of “free” love (if you get what I mean). Trust me, book your visit to Venice now! I’ll meet you there.

I spent one of the best weeks of my life in London. First of all, do not have a high brow with me and say that London is cliché. Trust me, London is never boring, especially when you’re a single American boy looking for a good time!

SoHo is a great section to party with your friends. It’s neighbored by China Town near the Piccadilly Circus stop on the train (or tube, they’d say). You have to visit the bar “G-A-Y,” which is full of young guys from all over the place, many of them alternate between there and “Heaven,” another scandalous party club. But nightlife is slowly beginning to migrate from SoHo to Shoreditch, which is in East London (another fabulous section).

East London is beautiful and changing its landscape in the last few years, with new shops and bars popping up on the weekly. There is always something (and someone) to look at, plus you don’t have to worry about a language barrier. To me, it’s perfect in every way.

Many gay travel enthusiasts consider Berlin to be the most progressive city in the world — that’s saying something! Gay, straight, bisexual, transgender, it doesn’t matter any more. Berlin has made a conscious effort to reverse Germany’s post-WWII reputation, and they’re doing a great job.

Gay bars are literally all over the city, and performance artists are always looking for an audience. Krezuberg and Neukolln are fun neighborhoods for gay singles, because everyone seems to be on the same page: They want to let loose and have fun. These are the best sections to meet the cream of the crop.

Related: 10 Things You Should Know Before Going on a Gay Cruise

What I love most about Germans is that many of them don’t give a f*ck … about anything! It’s a breath of fresh air. All they want to do is chat, drink and laugh. It’s so different from pretentious attitudes many gay Americans face on daily. Germany is a whole other world, and every person I know from Berlin wouldn’t want to live anywhere else. Liberal-mindedness seeps in the city’s pipeline, and it’s contagious. I mean, people sunbathe in parks during the summer. You can’t get freer than that!

The city is incredible. I was lucky enough to visit a couple years ago, and for whatever reason I thought it was going to be slightly homophobic. But I was wrong completely!

The city itself is so well preserved. It felt like I was living in a postcard. The Gay & Lesbian Summer Festival is a big thing there, and draws many sexy tourists and locals annually. The museums are popping, and if you walk up and down the canal streets, you will find countless artistic houses — my nosy ass peeked in many windows, and discovered lots of art studios. Pretty much everyone in this town is friendly, open and liberal-minded.

The famous red light district is fun to watch, but at the end of the day it’s mostly straight. Go visit, but the real section you want is a street called “Reguiliersdwarsstraat.” My friends and I pronounced it “Rolling Dwarf Street,” and it seemed to get us by. This is where all the gay bars are, and trust me they’re packed. Your Grindr will be popping. Add marijuana and insane shops on every corner and you’re in for a great time.