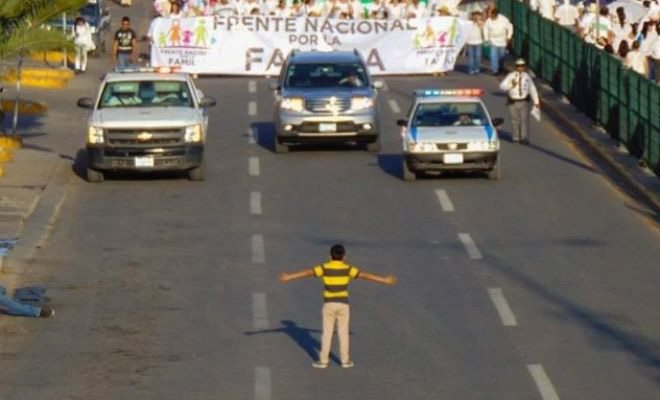 Over the weekend, thousands of anti-LGBT protestors from the Frente Nacional por la Familia hate group stormed the streets of Celaya, Guanajuato rallying for “pro-family” beliefs. The group opposed the approaching passage of marriage equality in Mexico.

Although they showed up in full-force, all it took was a 12-year-old boy to stop them in their tracks. Photojournalist Manuel Rodríguez captured the moment in a breathtaking image.

In an interview, Rodríguez told Regeneracion, “At first I thought the child was only playing,” but he later learned that the boy had a reason for taking on the protestors. The boy explained in an interview with Rodríguez, “I have an uncle who is gay. I hate that they hate him.”

Editor’s Note: This post originally contained a video which is no longer available and has been removed.