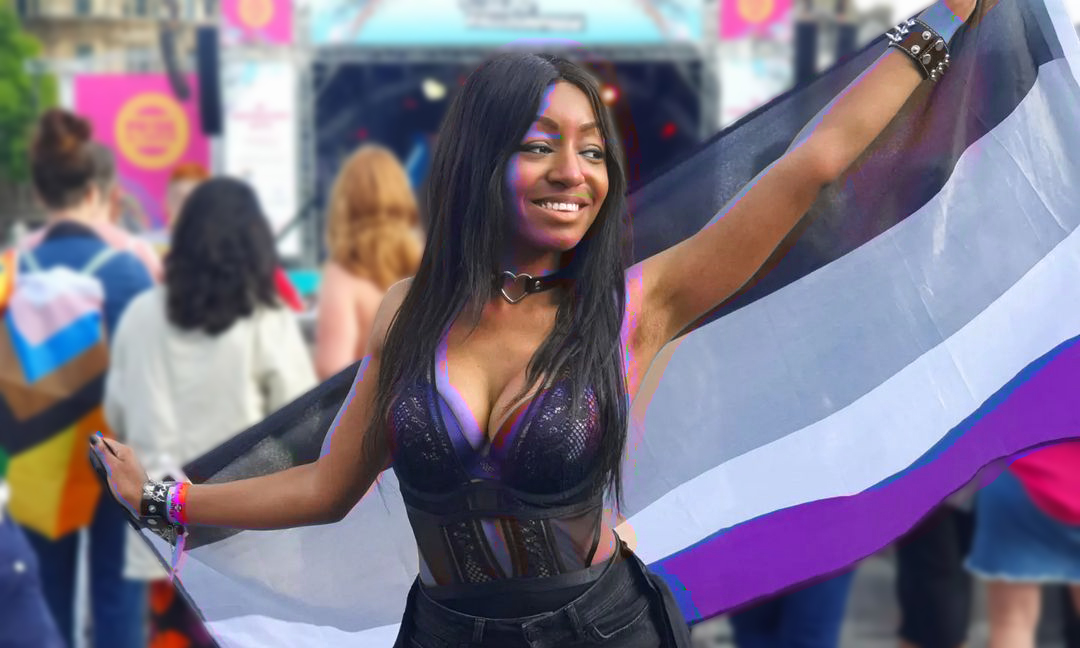 Yasmin Benoit is the Blueprint For Asexual Activism Online

Picture this. You live in the U.K., and your boss just fired you because you’re gay. Fortunately, the Equality Act 2010 makes this action unlawful and you have the right to challenge it. The Equality Act 2010 protects you from harassment, victimization, and discrimination, either direct or indirect. This protection is based on nine characteristics, including age, race, disability, religion, and sexual orientation. There’s a caveat to that last one, however. That’s because the Equality Act 2010 does not protect you if you’re asexual.

Unfortunately, that’s only the beginning when it comes to asexual discrimination in the U.K. and worldwide. According to a ground-breaking report released by market research firm Ipsos in 2022, the asexual population in the UK has increased to 2%. That means over 130,000 individuals may identify as asexual in the U.K. If you’re reading from the U.S., that’s more than the population of Topeka, Kansas. How is it that such a significant number of people can be left so vulnerable to discrimination? And is there anyone out there trying to change that?

As Ace Week 2022 came to a close, I sat down with model, asexual activist, writer, and researcher Yasmin Benoit. I have had the pleasure to work with many activists in my years in queer media. Nonetheless, I was positively giddy at the prospect of finally chatting with Yasmin face-to-face. Her tenacity never fails to amaze me. Despite many obstacles, Yasmin faces every challenge with a kind of positive and proactive attitude that ignites change. As I see it, her forward momentum is the blueprint for asexual activism online. She’s also a diehard metal fan who made a name for herself as an alternative model. As someone who also grew up listening to bands like System Of A Down, I feel a distinct kinship. 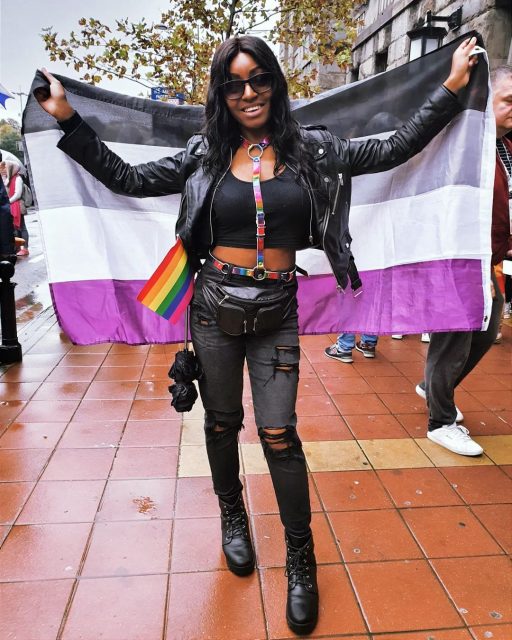 Yasmin also has a long list of accomplishments under her studded belt. Most recently she launched the first asexual rights initiative in the U.K. in partnership with Stonewall. Her work as an activist includes creating and launching the #ThisIsWhatAsexualLooksLike movement, co-launching the first-ever International Asexuality Day (April 6th), and becoming the first asexual person to win the Attitude Magazine Pride Award. Her work has been published in The Huffington Post, Gay Times, Ann Summers, GQ, and many others. She regularly uplifts asexual and aromantic folks online and combats acephobia and anti-Blackness in one fell swoop. All of this, as Yasmin puts it, happened by accident.

“It was pretty accidental,” says Yasmin. Because she was working as a model, Yasmin found herself online more and more. There she noticed a distinct lack of direction in asexual activism. “I didn’t really feel like there had been a lot of progress in terms of where asexual activism was at,” says Yasmin. “I felt like I couldn’t complain about a lack of Black asexual representation if I was actively not doing anything about it.” Yasmin began to casually talk about asexuality online, and it quickly snowballed from there. All of a sudden the Reading-born metalhead found herself at the center of a growing movement. One that she would impact greatly.

Although her modeling career was, in some ways, a stepping stone to her activism, Yasmin never saw any overlap between these two parts of herself. For others, the context of her lingerie modeling and her asexual identity raises eyebrows. “I think it’s just when the images go out into the world, it influences how they’re perceived if you kind of know something about who the image is of,” says Yasmin. Although the content would be the same, regardless of whether Yasmin was asexual or not, the content can take on a new meaning for the observer.

Yasmin explains that her modeling content is just an avenue of self-expression and not necessarily an attempt to break stereotypes. And yet, her work as a model does challenge all-too-common beliefs held by allosexual folks in the mainstream. It seems that Yasmin simply could not escape advocacy work, even if she wanted to.

Bringing a Community Together

To be clear, she doesn’t seem to want to. And why would she? Yasmin says that, in a way, she created her community almost in service to herself. “I also wasn’t seeing what asexual people really looked like,” says Yasmin. “So much of our interaction happens online […] You see a lot of avatars and emojis and just like, blocks of text”. Yasmin says she wasn’t seeing the faces in her community very much. When she did see them, they were mostly white teens in the U.S., which speaks more to access than it does actual asexual identity. “It’s not really representing the diversity of our community,” says Yasmin. “And it’s not like the media’s going to catch up to that any time soon.” 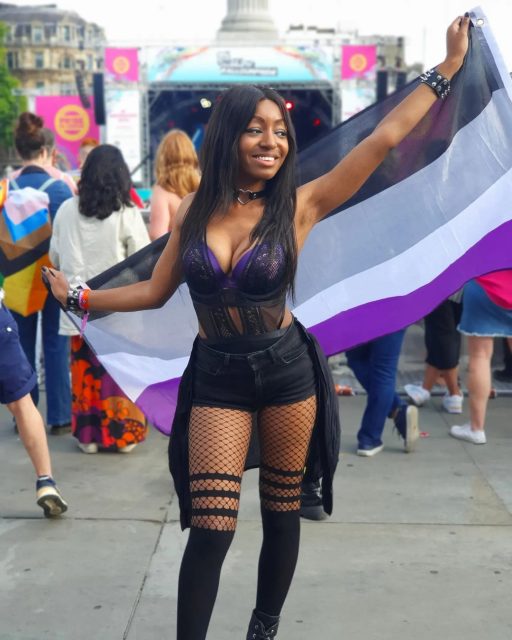 Creating this community gave Yasmin a place to get to know her community on their terms. People from all over the world, from her backyard to India. These are important moves for a community shrouded with so many misconceptions and stereotypes.

The reality is that asexual folks can look like anyone. They come from all cultures, genders, and ages. “We actually have one of the more diverse age ranges,” says Yasmin. According to the same Ipsos report, 2% of millennials and 2% of Gen X identify as asexual. Although the term is gaining in popularity, it’s important to remember that asexual folks have always existed. “Our society hasn’t started placing such importance on labeling every single non-heteronormative orientation until more recently,” says Yasmin. Asexuality is a natural variation in human sexuality that existed long before the label came to be.

Another common misconception found, even within the queer community, is that asexual folks are inherently “anti-sex” or in some way sex-negative. “Not experiencing sexual attraction doesn’t mean you’re against sexual attraction,” says Yasmin. These kinds of ideas can sometimes be rooted in the misguided belief that asexuality is a “lifestyle choice.” Ironically this is a weapon often used to hurt other members of the queer community, and yet we are sometimes all too quick to wield it.

So, where do we go from here? According to Yasmin, the answer is legislation. “Awareness is helpful, but when you talk about representation that’s not just a side character on a TV show,” says Yasmin. “You’re gonna need legislative representation […] Actual fundamental things that are going to permanently impact our lives.”

This is no small task. As big as it turns out the ace community is, they are going to need allies to make this kind of change viable. This is where Stonewall, the largest LGBTQIA+ rights organization in Europe, comes in. Yasmin saw the kind of change they were capable of effecting and reached out to them herself. When she learned that they had no ongoing plans to research and report on asexual inequalities, she took the initiative. “I kind of talked them into it,” says Yasmin. She made her case to the team and they let her run with the project. As someone with an Undergrad in Sociology and a Masters’s in crime science, it’s not hard to see why they trusted Yasmin with leading this research.

“We’re going to be releasing a report into asexual discrimination in the U.K.,” says Yasmin. “Specifically in terms of the workplace, healthcare, and education”. The Equality Act 2010 protects marginalized groups in these areas. What they need is data. Conversations online can be healing, cathartic, and helpful to community members, but legislative change requires documentation.

The Time Is Now

The report is underway, but what we can say is asexual folks right now are vulnerable. They are unprotected in the same spaces their queer peers are protected and they often don’t have our support. Asexuality is also still a pathologized orientation, meaning they are especially vulnerable in the healthcare system. Homosexuality was included in the United States DSM until 1973 and the U.K. ICD until 1990. To this day hypoactive sexual desire disorder—pretty much the definition of asexuality—is in both. Although the DSM does have a small qualifier that makes an exception if the patient identifies as asexual, that highly relies on the current information available to both the provider and their patient. All of this has a very real impact.

According to the National LGBT survey in 2018, ace folks are 10% more likely to be offered or undergo conversion therapy compared to other orientations. It so happens that the U.K. government appears to be dragging its feet when it comes to banning conversion therapy. Even if they did ban conversion therapy it’s possible they wouldn’t include asexuality. “Even though we’re more likely to experience it,” says Yasmin. We know change is possible, although it is also rare. New York is currently the only place that mentions asexuality in its sexual orientation non-discrimination act. 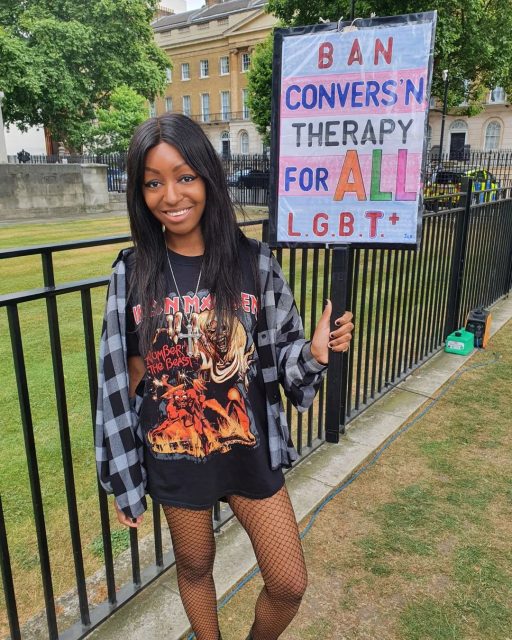 How Can You Help?

Lucky for you, your job is easy. “Amplify it,” says Yasmin. “If you see it, share it.” When this report comes to light it’s important that people have the vocabulary and empathy to understand it. Share resources and knowledge online. Follow asexual activists and educators online to equip yourself with the tools you need to talk about asexuality confidently. Use that confidence to engage in thoughtful conversations about asexuality with your peers and family members.

It’s our job to extend the sphere of influence for asexual folks far beyond that 5%. It’s our job to rally allies to support Yasmin’s work and research. If you’ve made it this far, follow her on Instagram and Twitter to keep up with the latest news. Listen to a song by Slaughter to Prevail as you write to your representative about sexual rights in your area.

Oh, and don’t forget to tell Yasmin that you appreciate her. I know I certainly do.

Yasmin Benoit is the Blueprint For Asexual Activism Online