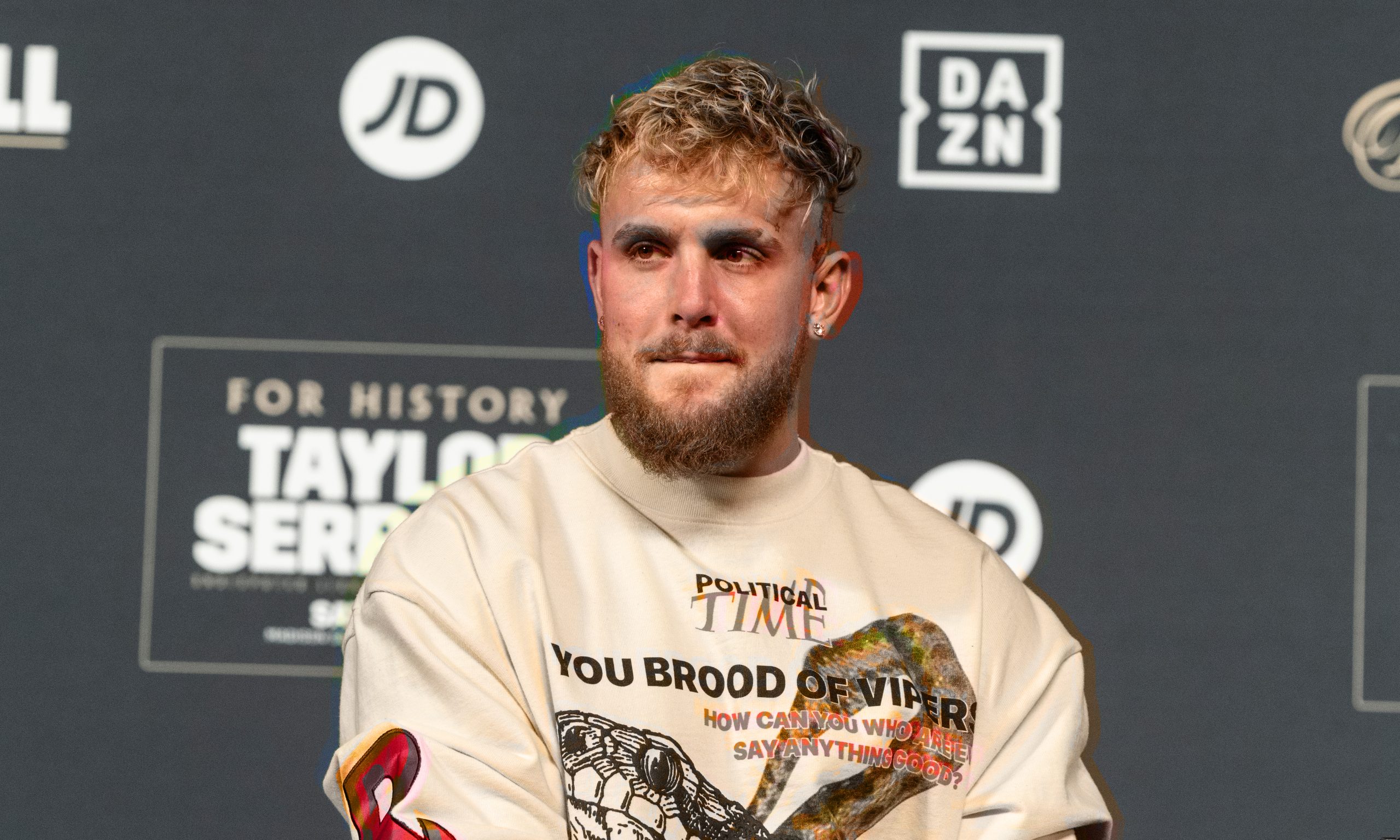 Why Jake Paul Is Problematic

Like his older brother Logan, Jake Paul has built a career out of controversy. Paul started as a brazen Vine star, churning out outrageous skits and stunts on the now-defunct video-hosting app. Since his rise to fame, he has been accused of being racist and sexist. He has also faced sexual assault allegations and he was charged with trespassing. He even had his home raided by the FBI and threw a party at the height of the COVID-19 pandemic.

Today, the 25-year-old internet sensation is also a pro boxer. He competes under the moniker “The Problem Child,” a nod to his problematic public persona. Despite, or perhaps because of, his behavior, Paul maintains millions of followers across several channels. His matches draw in massive crowds and inspire think pieces about whether it helps or hurts the future of boxing.

As he teases “negotiations” for a potential fight with fellow problematic celebrity Andrew Tate, let’s look back on all the offensive antics that have propelled Paul to infamy and answer the question, “What is wrong with Jake Paul?”

He Was Fired From A Disney Show For “Terrorizing” His Neighbors

In 2015, Jake Paul was cast in the Disney Channel series Bizaardvark. The show centered around a pair of teenage video bloggers, not unlike Paul himself. Unfortunately, his stint on the show was short-lived. In 2017, Paul was fired from Disney around the same as his first major controversy. A video of the internet sensation and his “Team 10” collective started making the rounds online. In it, the YouTubers are accused of making the lives of their West Hollywood neighbors “a living hell” for their antics and stunts, including setting a mattress on fire in their backyard and riding a motorbike into a pool.

At the time, Paul claimed he was leaving the show of his own volition. He said he “didn’t want to play a teenager for four years of his life”. Paul also said he wanted to focus more on his “personal brand”. This included his YouTube channel, business ventures, and “working on more adult acting roles”.

Love you all! Thanks for the support❤️

Can’t wait to continue to grow and conquer🙌🏼

He Made Xenophobic Comments Towards A Kazakhstani Fan

The same year the controversy with his LA neighbors went public, Jake Paul found himself in hot water yet again. Paul made a xenophobic comment toward a Kazakhstani fan in a vlog called “SELF-DRIVING TESLA DRIVE-THRU PRANK”. In the video, Paul asks the fan where he’s from. When the fan says he’s from Kazakhstan, Paul responds, “It sounds like you’re just going to blow someone up. You’re like, ‘Send the nuke!”

Paul was swiftly lambasted by fans and critics online for the racist comment.

He Was Accused Of Scamming His Followers

Jake Paul was accused of scamming young, impressionable followers several times over the past few years. In one instance, he launched a series of “educational videos” called “Edfluence”. For $7 Paul said that he would help fans follow his path to success as an influencer. However, as it turned out, the $7 did not unlock the entire program but only a handful of basic tips. Subscribers had to cough up an additional $57 to gain full access and a potential spot on “Team 100”. This was an expansion of the popular YouTube squad that Paul founded. However, Team 100 never came to fruition.

Paul was also called out for promoting a loot box brand called Mystery Box. The brand allows players to spend a variable amount of money for a chance at winning mystery prizes. Many Mystery Box buyers called out the company for delivering inferior goods like fake designer shirts. Some buyers claimed to have never even received their orders at all.

He Was Charged With Trespassing In Arizona

In June 2020, a month after he revealed that his high-profile, paid-live streamed Las Vegas wedding to YouTuber Tana Mongeau was staged, Jake Paul’s problematic behavior reached an all-time high. Paul and his friends uploaded videos of themselves at a shopping mall in Scottsdale, Arizona at the same time a Black Lives Matter protest was taking place. Videos taken by his associates and other attendees show Paul in the vicinity as people stole alcohol and threw fireworks at the mall – leading many to believe that the YouTuber and his friends participated in the looting.

Paul later issued a statement saying, “neither I nor anyone in our group was engaged in any looting or vandalism. For context, we spent the day doing our part to peaceful protest one of the most horrific injustices our country has ever seen, which led to us being tear-gassed for filming the events and brutality that were unfolding in Arizona”.

Paul was charged with two misdemeanors for Criminal Trespass and Unlawful Assembly following the incident.

He Was Caught Partying During The COVID-19 Pandemic

A month after the trespassing incident, Paul came under fire yet again after videos of a massive party in his backyard surfaced online. The videos revealed dozens of attendees ignoring advice to maintain social distancing and wear masks amid a surge in COVID-19 cases in California.

In an interview with Fox 11, Calabasas Mayor Alicia Weintraub called Paul and his associates out, saying the party was a “big huge disregard for everything that everybody is trying to do to get things back to functioning”.

His Home Was Searched By The FBI

In August of that same year, the FBI conducted a federal search of Paul’s home and reportedly seized several firearms, including “at least five long guns”. The search, reported by the Los Angeles Times, was related to the alleged looting incident in Arizona.

One photo even showed “what looked like a long gun propped up against a hot tub in the backyard”. Bear in mind that Paul’s Team 10 house was once the home of underage content creators hoping to make it big under the guidance of stars such as the Paul brothers. Some of those creators have since stepped forward to accuse Paul and his crew of exploiting them for views.

What appeared to be multiple firearms were found scattered throughout the property, including what looked like a long gun propped up against a hot tub in the backyard. https://t.co/oOkiwY7kSz pic.twitter.com/ZeCXhPI5Aa

He Spread Misinformation About COVID-19 Being A “Hoax”

Since Paul’s pivot to the world of boxing, he’s attempted to shed a bit of his “problem child” persona. He even put his Team 10 mansion up for sale in December 2020 to “focus on training”. Still, an interview with The Daily Beast about his November 2020 fight with former NBA player Nate Robinson stoked outrage from fans and critics once again. This time, for his views on the COVID-19 pandemic.

“This is the most detrimental thing to our society,” he said about COVID restrictions. “COVID cases are at less than 1 percent, and I think the disease is a hoax.” When the interviewer pointed out that COVID had already “killed about 260,000 people so far this year”, Paul responded, “Ugh, Yeah, and so has the flu”. When prodded further on why he thinks COVID is a hoax, he dismissed the question by saying he “doesn’t have to elaborate”.

He’s Been Accused Of Sexual Assault

In April 2021, a TikToker named Justine Paradise took to YouTube to accuse Jake Paul of sexual assault. In the video, Paradise talked about signing a non-disclosure agreement before entering the Team 10 house and how she and Paul exchanged text messages for a month in 2019 before Paul assaulted her. She accused Paul of forcing oral sex on her in the Team 10 house and said she was “physically restricted” and “felt emotionally restricted afterward”.

“He didn’t ask for consent or anything,” said Paradise. “That’s not okay. On no level at all is that okay.”

Despite his attempts to move away from his enfant terrible reputation, it seems that Paul’s fame (or infamy, rather) will always be tied to his controversial nature. Whether or not he can break free from this box he put himself in remains to be seen. But before he can ever move on from his past (if he even wants to), he’ll have to own up to years of bad behavior.

Related | 18 Trans and Non-binary YouTubers You Need To Watch

Why Jake Paul Is Problematic