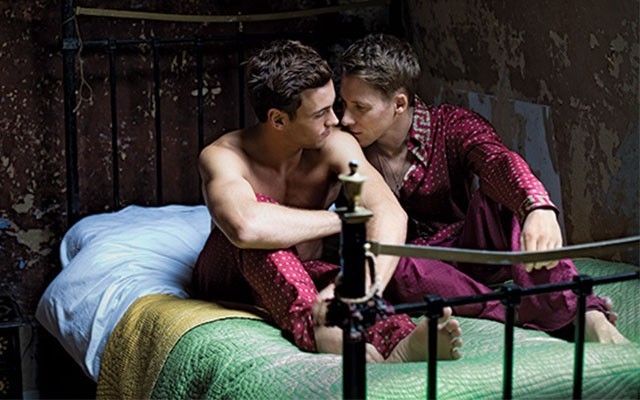 In an interview with Out Magazine, Tom Daley and Dustin Lance Black described their relationship from the moment they met to their engagement in detail.

According to Black, he’d been planning to propose to Daley. The 41-year-old screenwriter recounted the path to their engagement in exquisite detail, saying:

“It happens to be the sunniest, most beautiful day in the fall that England has ever seen, so there were thousands of people in the park. And people were coming up to ask Tom for autographs and photos, and I was frustrated and Tom could tell I was frustrated, so then we go to this dinner that I’d organized, originally for what I thought would be a celebration dinner, and I decide I’ll do it there.

One smiley face and eight attempted proposals later, our #LoveIssue couple #DustinLanceBlack and #TomDaley got engaged in the most unexpected place. Read their story on out.com now. Link in bio. (Photo by @harryborden)

It’s a nice restaurant, it’s right by our house, and we’ll be able to point to it later and say, “That’s where it happened.” The restaurant was empty — there was one other couple there, and of course they sat us right next to them. I thought, “Why do they do this in England? But I can’t complain because I’ll tip my hand and then Tom will know. So, I thought, OK, Tom loves England. A short walk away from our house is Tower Bridge, an icon of the country he loves. It’s a Sunday night, so it will be abandoned.

But as we approach Tower Bridge I start seeing thousands of people, and I look up and it’s the night of the blood moon, which is rising right between the towers of Tower Bridge. And every news camera, every photographer, every observer is there to document it. I just thought, This obviously was not the day it was meant to be. So we go home, I go into the bathroom to get ready for bed and come out in my underwear, and that’s when he drops down on one knee and proposes to me.”

“I had the ring box in my underwear, and when he came out of the bathroom, I just went down on my knee and proposed,” says #TomDaley about his engagement to #DustinLanceBlack. Link to the story in our bio. (Photo by @harryborden) #LoveIssue

Daley’s proposal wasn’t quite as grandiose as Black’s plan. The 21-year-old Olympian described the moment the couple became engaged:

“I had the ring box in my underwear, and when he came out of the bathroom, I just went down on my knee and proposed. Then he ran off to the bathroom to get his rings, and he had this whole speech prepared, but he’s a writer so his was quite extravagant. But looking back, all I can remember is being completely overwhelmed, like, Oh my God, we’re now engaged. Who do we have to call? So I called my mom, and he called his stepdad.”

In the interview, Daley and Black also discussed how they met, and that they considered getting married after knowing one another for only two weeks. Read the entire interview on Out.com.