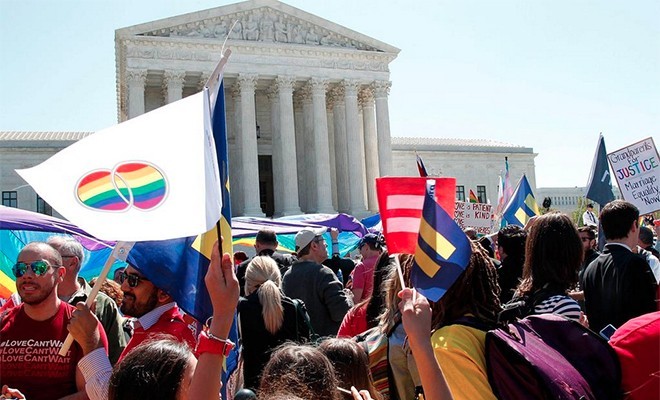 Equality advocate and attorney Mary Bonauto noted that the love truly is love, and that, with the exception of gender, there are no differences between the relationships of same-sex couples and opposite-sex couples. According to audio made available by the court, Bonauto said:

“The stain of unworthiness that follows on individuals and families contravenes the basic constitutional commitment [of] equal dignity.” Bonauto

According to The New York Times, the conservative justices asked questions pertaining to traditional marriage which caused the nine justices to debate throughout the first session.

“[The nine justices] clashed during arguments on whether there is a constitutional right to same-sex marriage.”

Although some of the justices have expressed their support of marriage equality, some showed inclinations to ban same-sex marriage. Chief Justice John Roberts, a traditionalist, insinuated that he was unable to find a reputable definition of marriage that included same-sex couples in the description of the union.

As the nation waits for a verdict, marriage equality supporters and those who want to ban same-sex marriage express their views rampantly on Twitter.

More than 5,000 people marched to support traditional marriage ahead of the #SCOTUS hearings: http://t.co/w4jEq9Wyq1 pic.twitter.com/w5qecZUbao

Thinking of our friends across the border today! #lovecantwait #MarriageEquality pic.twitter.com/XXPpbKrlWK

Thinking of our friends across the border today! #lovecantwait #MarriageEquality pic.twitter.com/XXPpbKrlWK