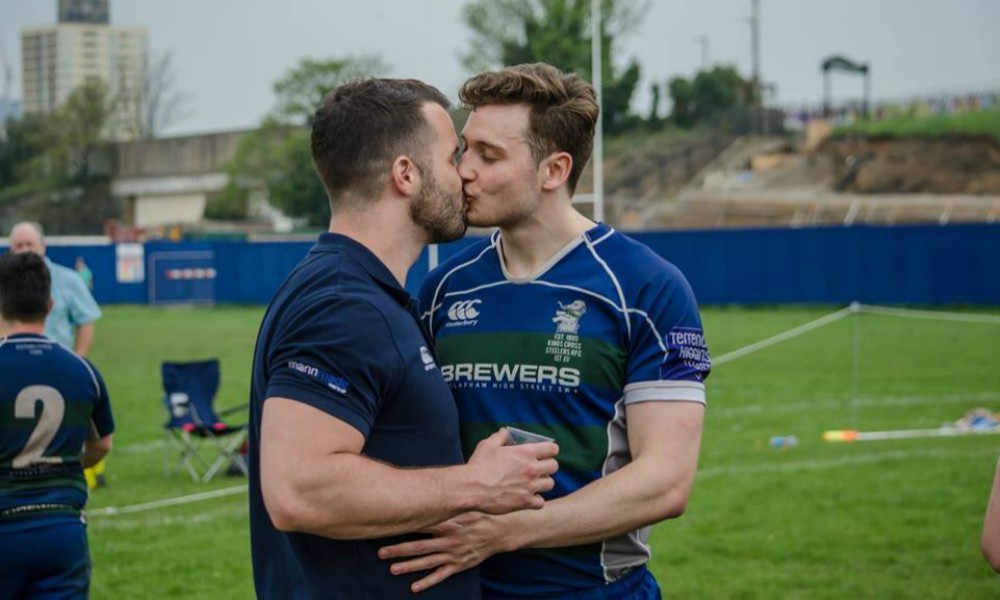 Earlier this month, Australian rugby player Israel Folau prompted outrage when he implied that gay people will go to “hell” unless they “repent of their sins and turn to God”. Folau made the homophobic remarks in an Instagram comment, which he eventually deleted.

Despite Folau’s homophobic commentary seeming to violate Rugby Australia’s inclusion policy, the sports organization did not impose a sanction on him. However, that hasn’t hindered LGBTQ people and their allies from challenging his ignorant homophobia.

One of the LGBTQ people publicly challenging Folau is bobsledder-turned-rugby-player Simon Dunn, who shared a photo of a “victory kiss” with his boyfriend Felix on social media.

The adorable duo play together on the Kings Cross Steelers, a queer-inclusive London rugby club.

Recently, Simon tweeted the photo again and tagged Folau in the caption. Then, he encouraged his followers to retweet the tweet, so the homophobic rugby pro receives the notifications about the kiss, forcing him to acknowledge the kiss.

“You know what to do: Get retweeting!” Dunn wrote.

In an interview with Gay Times, Dunn addressed about Folau’s nasty comments saying, “Unfortunately the sporting world is still a place where kissing my partner after our team’s victory is still seen as an act of defiance or rebellion.”

He continued. “It’s an environment where someone’s homophobic comments can be defended as ‘just his opinion,’ and that truly is worrying.”

“I’ve devoted my life to sports, and as an out and proud athlete I’ll continue to do what is natural for me, and hopefully break down stereotypes in the process.”

Dunn isn’t the only prominent person to share their opinions on the controversy. Riverdale star KJ Apa recently called out Folau in an Instagram Story.

“Our role as Christians is to LOVE not judge. What gives you the right to condemn? Are you perfect? Sit down,” he wrote.