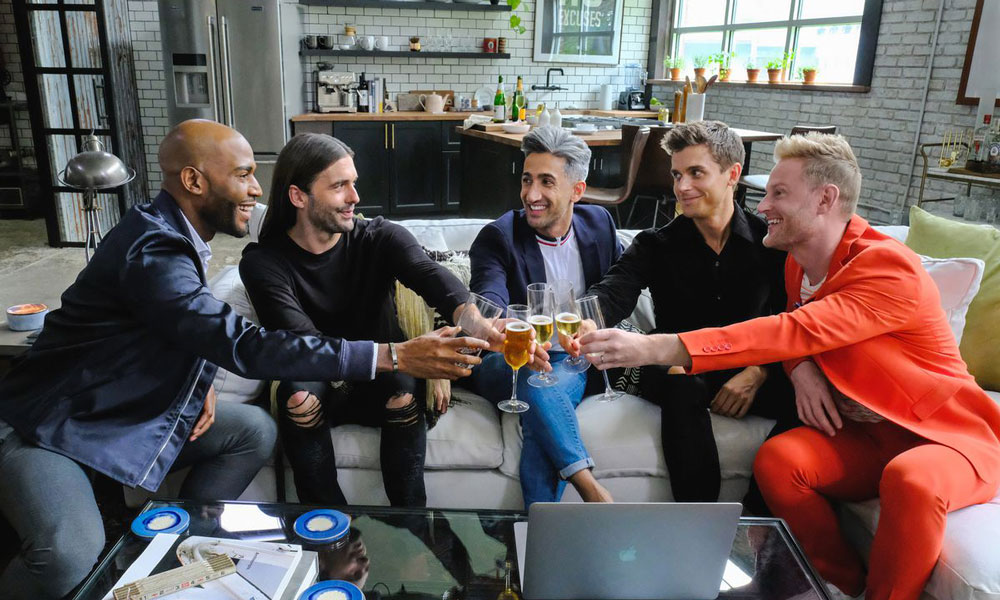 Netflix’s revamp of the classic makeover show Queer Eye, originally called Queer Eye for the Straight Guy, has received rave reviews. In this eight-episode season, the “Fab Five” — gay men who are experts in grooming, fashion, culture, design and cooking — pile into a new pick-up truck to scour the Atlanta area for lonely and messy men.

The show adapts to current social realities. Bravo’s classic Queer Eye for The Straight Guy aired in 2003 and was considered daring simply by displaying gay and heterosexual men interacting on television.

This Fab Five address a wider range of issues including racism and religious differences. Recent reviewers say the show does a good job of teaching heterosexual men how to display emotions and develop self-acceptance. By so doing, Queer Eye becomes “an antidote” to contemporary forms of toxic masculinity that narrow men’s self-expression to aggression and anger.

These are lofty goals for a reality TV show that also offers tips for do-it-yourself exfoliating body scrubs. Indeed, the show’s focus on consumerism and outward appearance threatens its high ideals.

Viewers are directed towards a singular concept of who the show’s made-over men, called “heroes,” are supposed to be: flawless, self-made entrepreneurial men. This is a problem, not only because perfection is unattainable, but also because it erases the diversity of backgrounds and life experiences that the show purports to embrace.

I was immediately hooked on Queer Eye’s fun episodes and obligatory happy endings, but I also noticed that it inspired me to scrutinize my life through the Fab Five’s eyes. What would Jonathan say about my hair? How would Bobby jazz up my living room?

Scholars who analyzed the original Queer Eye picked up on this underlying compulsion. Katherine Sender describes how the show made “heterosexual masculinity… compatible with the neoliberal moment.”

Neoliberalism, as Sender describes it, is an economic and political perspective that has accompanied the rise of the digital age. More independent and also precarious working conditions, paired with a free market economy, means individuals must now display themselves as self-reliant and highly employable.

Integral to this display is widespread consumption: To show off your value, you must purchase a range of items to convey social, cultural and economic status. Queer Eye’s fitted suits, fancy avocado salads and sleek household furniture function as status symbols.

Cultural messages reflecting this version of neoliberalism have targeted men and women differently. Gender-based biases generally associate a woman’s value with her appearance and body. Both the self-help industry and makeover shows attempt to reinvent women’s bodies to boost “sexiness” and “confidence.” This steers women closer toward an independent, self-regulating neoliberal ideal.

Fewer commercial messages and forms of popular media target men’s bodies. Men have also been reluctant consumers of cosmetic and domestic products that are often marketed as feminine.

Old and new seasons of Queer Eye bring heightened scrutiny to men’s bodies and domestic lives. Each episode involves the Fab Five bursting through the door and dissecting the “hero’s” hair, closet, bedroom, refrigerator and emotional state. They link problems in this sphere with broader issues of failed romantic relationships, deficits in confidence and unrealized career aspirations.

In the classic Queer Eye, the men are made over to reflect “a market-driven masculinity that depends on high levels of consumption.” All problems are solved through money. This remains true for the new version, as the show purchases new wardrobes, interior décor and tickets to cultural events that reconstitute these men as suave, desirable and employable.

Me: Yeah man, I like masculinty. Not really into the gay scene or anything BRO.

Me after watching 'Queer Eye': OMG THIS MOISTURIZER LOOKS GORGEROUS YAASS GURL I NEED THIS PINK BOXER BRIEF CAN I GET A CARAMEL MOCHA MACCHIATO WITH CHOCOLATE SPRINKLES THANKS BABY

While topics of race, religion and sexuality are tackled in the new Queer Eye, class is never addressed. As they drive through the southern U.S., the Fab Five do not mention the region’s recent recession and high unemployment rates.

These issues are not even addressed in the episode featuring a father of six who works two jobs. He explains he would rather provide for his children than spend money on his appearance.

The show’s avoidance of the men’s socioeconomic context aligns with neoliberalism’s focus on the individual. Within a mentality that favours free market competition, people are expected to be self-made entrepreneurs whose hard work naturally leads to economic success.

This perspective focuses on the individual’s ability and hard work and ignores the idea that individuals do not start with an equal playing field. Some people experience greater success due to their privileges, including race, disability, wealth, gender and sexuality. This narrow focus also reduces large-scale problems, such as high unemployment rates, to a focus on individual confidence levels and self-branding.

The new Queer Eye does, however, succeed in celebrating diverse representations of gay men. The original show was guilty of “gaystreaming,” the idea that gay personalities needed to adhere to stereotypes and downplay differences. Classic Queer Eye’s gaystreaming placed heterosexual culture at its centre, and downplayed the Fab Five’s lives, identities and sexuality.

In contrast, the new Queer Eye hosts discuss their backgrounds throughout the season. The Fab Five includes two men of color: Karamo Brown, a Black American, and Tan France, a British-Pakistani. They also display a spectrum of gender expression ranging from ‘more feminine’ to ‘butch.’ Heterosexuality fades from the show’s focus when they makeover a gay man. In Episode 4, the Fab Five help their guest, AJ, come out to his stepmother. It is in an emotional scene that caused an outpouring of tears from viewers.

Related | Out on the Screen: 50 Years of Queer Cinema in Britain

The show is able to venture into these wider realms of representation by smoothing messiness, controversy and conflict into unifying practices of consumption. At the end of the day, difference is once more erased as emphasis is placed on striving to be self-made, entrepreneurial men – something the Fab Five embody across broadcast and social media.

Several scholars, including myself, have written about how Instagram’s design and user practices combine to encourage and enhance displays of luxury, beauty and authenticity, and adherence to gender, sexual and relationship norms.

Lean into your strengths! Don’t hide the parts of you that make you strong or unique. Those are your gifts. #Motivation #Fitness #QueerEye

Their flawless photos and unabashed promotion of consumer goods assert their status as self-made entrepreneurs. As with Queer Eye, their images and captions are often void of references to struggles, inequalities or privileges.

Queer Eye has made some strides. The producers have shifted the focus from simple interactions among gay and heterosexual men to episodes that tentatively address broader issues of gender, race, religion and politics. However, the show follows the general trend of the past few decades, where gay men have become most visible and accepted in society through their role as consumers.

The Fab Five are excellent consumers who appear to be the ultimate self-made men. But their show fails to address barriers to success in today’s marketplace that make this neoliberal ideal unattainable for many.

Stefanie Duguay is an Assistant Professor at Concordia University.