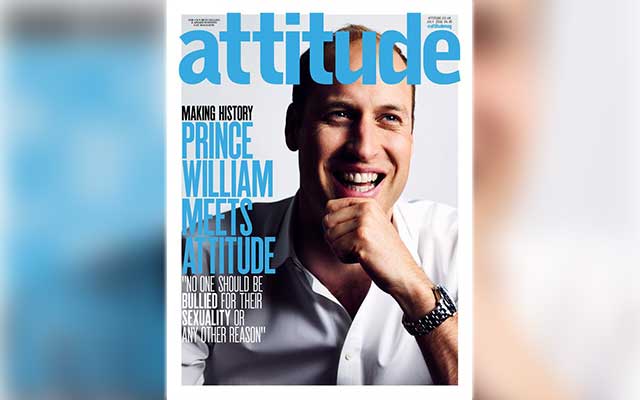 For the first time, a member of the Royal Family is appearing on the cover of a gay magazine. Prince William will appear in Attitude’s July issue, hitting stands June 22.

The story follows the Royal Highness The Duke of Cambridge as he invited members of the LGBT community to Kensington Palace to share their experiences of homophobia, biphobia, and transphobia, and also to discuss the mental health implications it has.

Attitude editor, Matthew Todd, led the discussion and after meeting with nine delegates, the Prince posed for the cover. The story was sent to print a few days before the Orlando Mass Shooting.

'No one should be bullied for their sexuality or any other reason'- His Royal Highness, The Duke of Cambridge appears on the cover of Attitude [email protected] @leighkeily photographs the first member of the Royal Family to pose for the cover of a gay publication.

“No one should be bullied for their sexuality or any other reason, and no one should have to put up with the kind of hate that these young people have endured in their lives,” Prince Williams said in a statement. “The young gay, lesbian and transgender individuals I met through Attitude are truly brave to speak out and to give hope to people who are going through terrible bullying right now. Their sense of strength and optimism should give us all encouragement to stand up to bullying wherever we see it.”

When HRH Prince William met Attitude: Take a look at our behind the scenes footage with the future King of the United Kingdom meeting with @mrmatthewtodd and members of the LGBT+ community to hear their experiences of homophobic, bi-phobic and transphobic bullying. The full video is on attitude.co.uk @kensingtonroyal Videography by @jondean_ photography by @leighkeily

“What I would say to any young person reading this who’s being bullied for their sexuality: don’t put up with it — speak to a trusted adult, a friend, a teacher, Childline, Diana Award or some other service and get the help you need,” Prince Williams said. “You should be proud of the person you are, and you have nothing to be ashamed of.”

While many LGBT people live successful lives, we can’t ignore the serious long term mental effects society might give us. Low self-esteem, eating disorders, depression, and drug addiction has been prominent in our community for decades. It’s time to end it.

“During my time as editor of Attitude I have met parents whose child has taken or lost their life after being bullied for being LGBT+ or just perceived to be LGBT,” editor Matthew Todd said. “I am very happy that the future King of the United Kingdom agrees this must stop, and I would urge parents, in particular, to raise their voices in their communities to ensure that every school protects — protects — all children.”

The historic issue will be on newsstands June 22.