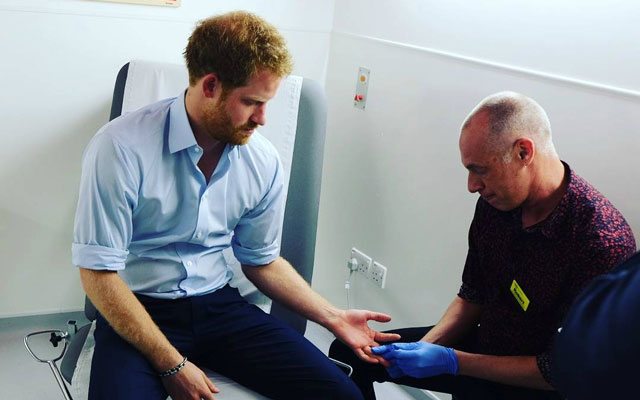 Two weeks ago, Prince Harry used Facebook Live to broadcast his experience getting tested for HIV. It was probably the coolest thing any member of The Royal Family has done in years — besides being Royal, of course.

The handsome Prince has always been an advocate for HIV prevention and treatment, and in front of nearly 2.3-million viewers, he explained the importance of getting tested. Even he, one of the cutest Princes in the world, was nervous to receive his results.

Prince Harry gets tested for HIV at Burrell St Sexual Health Clinic to show how quick and easy it is to be tested for HIV. It is a free, simple finger prick test and gives nearly instant results. Prince Harry believes that until everyone is relaxed about taking HIV tests – whether from higher risk groups or not – then tackling the stigma and fear surrounding this simple test will continue to allow the virus to win. Watch the test live on The Royal Family's Facebook page. www.facebook.com/thebritishmonarchy.

“It’s completely normal for me — even if I’m not from this part of London, or, ah, the, you know, being the person that I am and the people that I end up being around, I’m still, I’m still sitting, I’m sitting here and I’m still nervous,” he said.

It was great to watch, especially his conversation with the medical practitioner for those of us watching. He goes further to explain that even if he did contract HIV (his results indicated he’s HIV negative), he’d take daily medication and hope his potentially HIV-negative partner was not afraid of the virus.

After the video, the Terrence Higgins Trust, a nonprofit that is launching a pilot program of at-home HIV self-testing kits, saw a fivefold increase in orders.

“So whether you’re a man, woman, gay, straight, black, white, whatever—even ginger,” he says in the video, pointing to his head, “why wouldn’t you come have a test?”