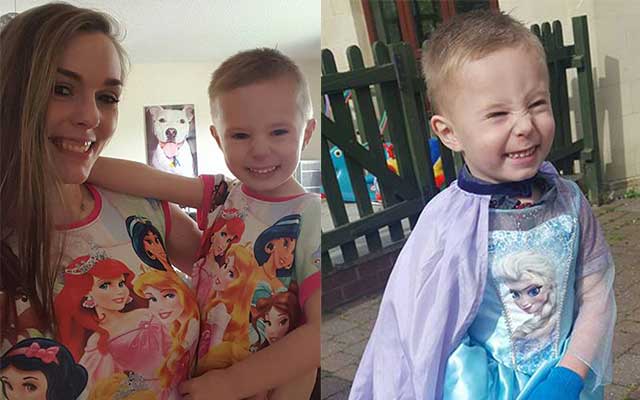 Haylee Bazen from Cambridge won the award for Mom of the Summer. After responding to a hater who criticized her for letting her 3-year-old son go to school in an Elsa costume, Bazen and her adorable son are

I don’t know what’s gotten into people who hate on a toddler, but clearly they need to lighten up. Haylee gave the “lady at the bus stop” a thing or two to cry about after posting her epic rant on Facebook.

You can engage with the post below, but here’s what it said:

“To the lady at the bus stop who felt the need to interrupt my conversation with my son.

I am NOT sorry you didn’t like how he was dressed nor am I sorry that you didn’t like our discussion topic of who our favorite Disney Princess is (Snow White obviously).

Zackary is my 3-year-old-son and he can be who he wants to be. Today, he was a Disney princess and YES I did send him to school like that. Why??? Because that’s what he wanted to wear, because he wanted to show his teachers and friends his Elsa dress, because he wanted to sing ‘let it go’ for show and tell, because he doesn’t understand the gender stereotypes YOU think he should conform to, but most importantly because he is awesome!!

He plays with cars and dolls, princesses and pirates. He rides his scooter or pushes his pram. He wears zombie face painting or lip stick and if he choose to wear a dress he can!!

So next time you see us, dressed as a princess or cowboy, keep you disapproving stares to yourself and unless you want to tell him how great he looks keep your poisonous words to yourself too.

You’re the one that should be embarrassed to leave the house not us!!”