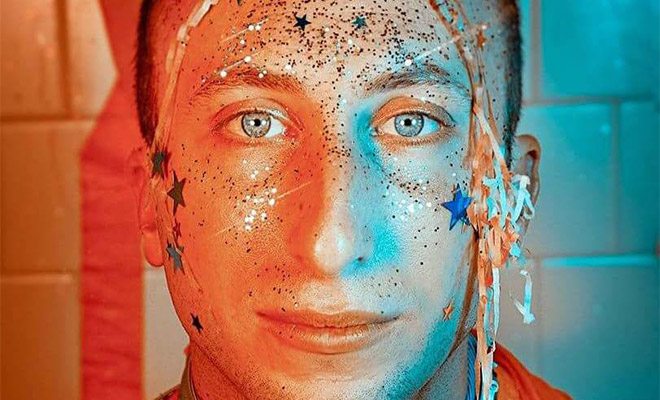 Michael Henry has become somewhat of a darling in the gay blogosphere in a very short time. Chances are you’ve seen his videos (they’re hard to miss). His sharp wit, dry delivery and honesty are quickly becoming a popular method of expressing the gay experience.

Unlike some other comedians, his writing doesn’t deal with obvious situations, but rather the invisible tension in common situations. It’s the tension that makes us wiggle in our seats while simultaneously laughing uncontrollably. It’s genuine, courageous and unique. I wanted to see what makes Michael Henry tick, and thankfully, Gayety was excited to bring you an exclusive.

I caught up with Henry between filming to hear what he has to say about comedy and gay culture. And yes, he’s just as funny off camera as he is on camera.

Gayety: Explain a little bit about how you got into comedy:

Michael Henry: I used to run home from school every day to watch The Golden Girls on Lifetime. I loved Bea Arthur’s character, and I thought I want to be just like her. She had all the jokes, self-deprecating attitude, different but fabulous. And her humor gave her power and respect. I think that is ingrained in me that that’s what good comedy is.

What inspires and annoys you?

What inspires me is my friends and the real conversations we have or the conversations that I observe other gay men having with either their friends or with their dates/boyfriends/hook ups. Also, I’m inspired by how gay men are portrayed or depicted in TV/films/media because I’m usually very opposite to them. And it always made me feel a little bit like I was a “bad gay.” I’ve also always felt somewhat like a spectator in the gay community, so situations that have me watching things unfold are something that I like.

What annoys me is, I guess nothing. Well, I guess I get annoyed when gay men don’t get my brand of comedy, I think they think I’m a hater on gay men or something. I’ve been called a homophobe multiple times by gay men. But not everyone gets comedy. Even some gay men.

If you can sum up your sense of humor, and how it threads into your writing/videos, what would it be?

I am an over-sharer, so I love humor that results from people being too real or saying too much about themselves or a situation. I love exploiting what makes us embarrassed. And finding the humor there.

I hate it when people say T.M.I.  I love too much information. Please tell me everything. Because I want to tell you everything.  Share that story you’re embarrassed to tell. I love it.

Tell me about the most awkward date you’ve been on:

Oy! Ok. I puked on a guy I had a crush on cause I got black out drunk. The end. Oh, and I sat in my driveway in the pouring rain begging for him to forgive me. He didn’t.

You can only have dinner with one person: Britney Spears, Lady Gaga, Cher, or Hillary. Who is it and why?

I would have to say, Britney. I love her. She has put smiles on my face, tears on my pillow and made me sweat on the dance floor like none other. I have so many memories attached to so many of her songs. I was in college during her “blackout” days and her “circus” albums so they hold a special place in my heart.

What’s been the most exciting part about creating these videos?

Relating to people. It’s been so amazing connecting with other gay men and straight people from across the world who feel like they are different, or weird, or the funny one. Because that’s how I feel I am and that’s my kind of people.

Your writing is simple, yet rings so true about the young gay male experience today. Would you say you’re the Lena Dunham of gay guys? Explain why you are or are not Lena Dunham:

I love Lena Dunham so much! To me, she is one of my idols. I try to be as raw, real and honest as possible with my work, which is what she is. I am perfect, but I am not a shiny, muscular man with a great job, savings account, or a boyfriend. I am a messy gay who gets jealous, eats three bagels in one sitting with 5 percent battery life at all times. And I think there are lots of gay men like me and that’s why my videos are resonating with people because they see themselves in me. And I make a point that no matter how dumb or embarrassing the situations are in my videos I ensure that I come out on top or at least end up being so ridiculous that you just can’t feel bad for me.

Who is your celebrity “fuck, marry, kill”?

I’d fuck Pavel Petel; he’s this Russian DJ that I just stumbled upon today. I’d marry Zac Efron so that I can make love with him every day. I would kill Trump.