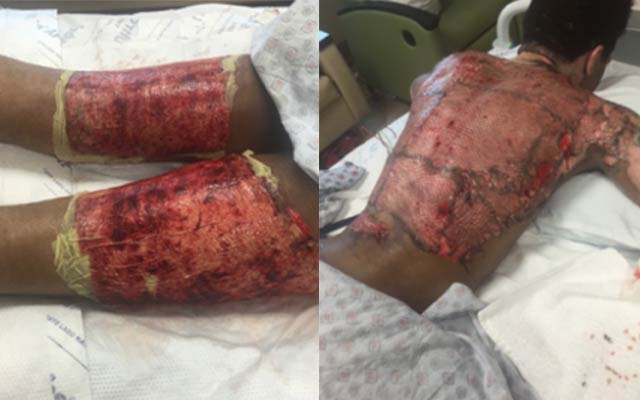 Earlier this year, we reported on a story of a homophobe, Martin Blackwell, who dumped scalding water on a young gay couple. The attack had horrific results and left the young men, Marquez Tolbert and Anthony Gooden, literally scarred for life.

Tolbert and Gooden’s wounds were severe and the recovery has been traumatic. In an interview with WSBTV, Tolbert said “Martin pulled me up and said, ‘Get out of my house with all that gay … I couldn’t stop screaming.”

Tolbert added, “The pain doesn’t let you sleep. It’s just, like, it’s excruciating, 24 hours a day, and it doesn’t go anywhere … It doesn’t dial down, anything. It’s just there. can barely think straight because the burning, the stinging is everywhere.”

Following the attack, Blackwell didn’t show a bit of remorse, and he responded to their injuries nonchalantly. He told police, “They were stuck together like two hot dogs… so I poured a little hot water on them and help them out. They’ll be alright. It was just a little hot water.”

Blackwell has been sentenced to 40 years behind bars, which gives him plenty of time to reflect on his homophobia. If you’d like to help, check out their GoFundMe page, which has raised more than $72,000.