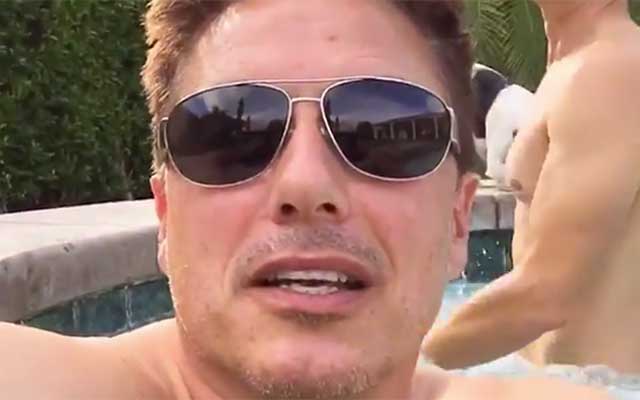 John Barrowman is an extremely well-known actor who you probably recognize as Malcolm Merlyn from Arrow and The Flash. Apparently, Barrowman and his husband Scott Gill spend a lot of time in Palm Springs (can you blame them?). And when this hunky couple relaxes in the desert, they let everything hang out.

When we checked Barrowman’s Facebook page, the 49-year-old actor had 1,121,145 Likes, and we’re willing to bet they’re glued to his live videos. Apparently, while hot tubbing in Palm Springs, Barrowman was streaming live video and Gill happened to walk straight towards the camera wearing … absolutely nothing.

That’s right, Barrowman’s Facebook fans got one hell of a show today, when Gill strutted his stuff on live stream. We’re not complaining; his package was in full swing and we loved every inch of it. And, there were at least seven inches in frame.

UPDATE: Facebook removed the video that corresponds with this story.