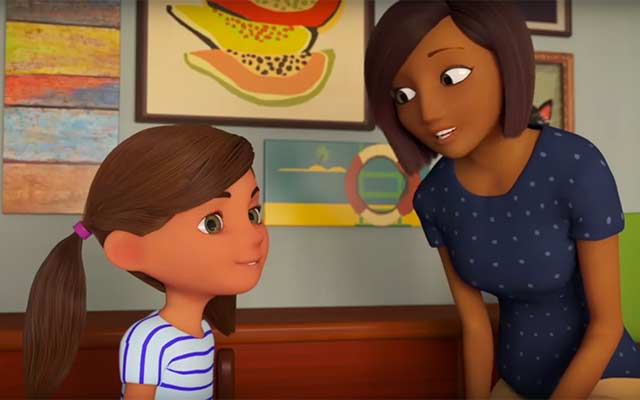 I’ve seen some pretty bad cartoons in my day, but this one is probably at the top of the ticket. If you think you’ve seen anti-gay bigotry at its worst, you ain’t seen nothin’ yet.

Jehovah’s Witnesses, the religious group known for going door-to-door, released a series of cartoon videos for children, aimed to teach them lessons. One particular video in the series tackles the subject of same-sex parents.

The video opens with a little girl drawing pictures of her family in class. She comes across a picture another student drew of her family — with two moms. The little girl goes home and asks her mom about it, who, in a perfect Disney “mom” voice proceeds to tell her in so few words that if you don’t have an opposite sex partner, you’re going to hell.

“People have their own ideas about what is right and wrong,” the mom says, “but what matters is how Jehovah feels. He wants us to be happy and he knows how we can be the happiest. That’s why he invented marriage the way he did.”

Then, she compares being gay to airplane security:

“It’s kind of like bringing something on a plane. What happens if someone tries to bring something on that isn’t allowed?” Mom asks, to which the girl responds saying that they aren’t allowed on. “It’s the same with Jehovah! He wants us to be his friend, and live in paradise forever, but we have to follow his standards to get there. To get there we have to leave some things behind – that means anything Jehovah doesn’t approve of.” In other words, you’re going straight to hell if you’re queer.

The girl, who’s as cute as a button, soaks in her mom’s message and says that she thinks she should tell her friend that Jehovah doesn’t approve of her family. Mom couldn’t be prouder. “People can change,” mom says. “That’s why we share his message.”

And another bigot was born.

This is exactly how parents poison the minds of their children, and why the cycle never ends. Watch the video below and see for yourself: