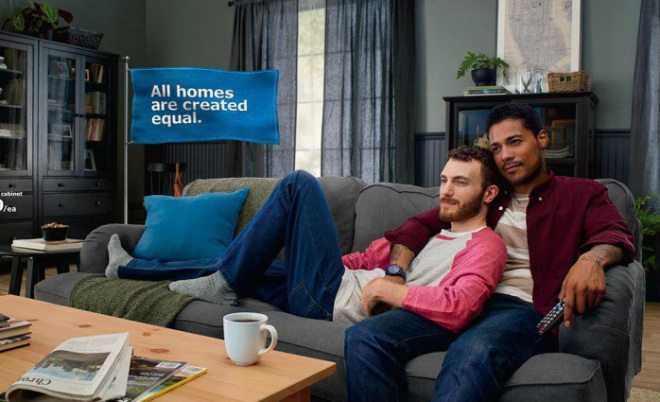 IKEA launched a brilliant ad campaign featuring an adorable interracial gay couple. In the print ad, the couple cuddles together on a couch, and in the background, there’s a blue flag that reads “All homes are created equal.”

According to AdWeek, the new IKEA campaign titled “The Dream” celebrates diversity and the evolution of the American dream. Leslie Stone, director of strategic services for Ogilvy (the creative agency behind the campaign) said, “There are so many different ways that Americans live — multigenerational, gay parents, etc. — that define the real portrait of the America that’s really out there.”

Stone added, “If we’d put across 20 different living situations, they’d all be equally powerful.” In the video’s YouTube description, the brand wrote “IKEA believes that a home isn’t just where you live. It’s the foundation for you and your family’s dreams, goals, and aspirations — whatever they may be. And that’s something you should be able to afford. Because no matter what you do, who you are, or how much you make, you deserve to make the dream yours.”

IKEA isn’t the first company to embrace diversity, and, hopefully, it won’t be the last. Watch the 30-second commercial below!