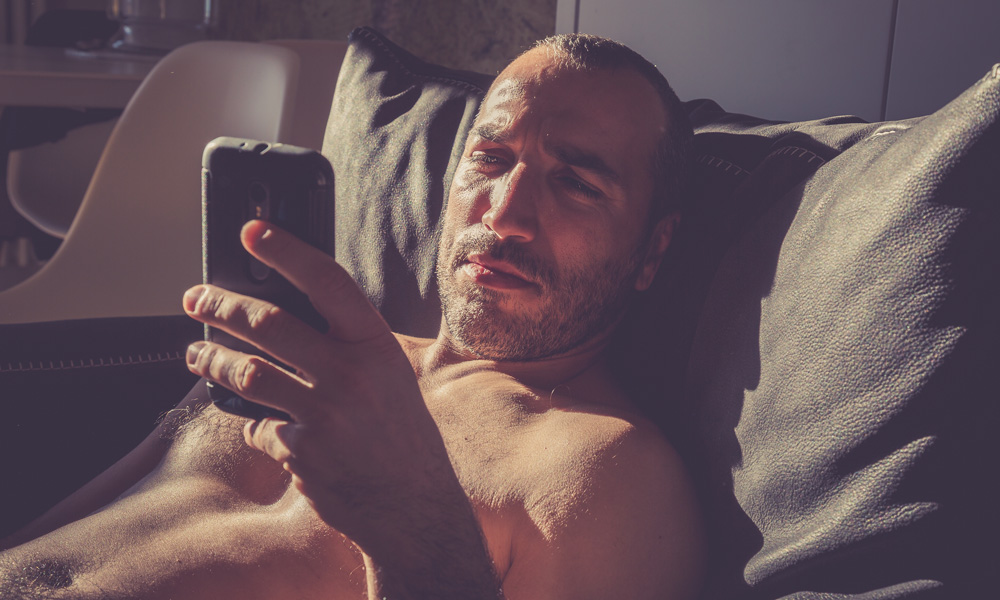 The research found Tinder users reported lower levels of satisfaction with their faces and higher levels of shame about their bodies. And users were also more likely to view their bodies as sexual objects.

This is hardly surprising given that Tinder’s “evaluative factors” have the potential to intensify preexisting cultural beauty ideals. The app’s “swipe right to dismiss” facility, along with the limited number of words a user can write on their profile means appearance take centre stage. In other words, the more conventionally attractive your photos are, the more likely you are to be clicked, swiped or hit upon by other users.

Related | Who’s Avoiding Sex, and Why

But whether men use Tinder or not, most will report dissatisfaction with some aspect of their appearance. This could be anything from height, body hair, muscularity, skin tautness, shoe size, penis size, facial symmetry, head hair amount and more. Sadly there are few areas of the body men do not find fault with.

Over the last few decades boys’ and men’s appearances have come under increasing scrutiny. This is largely because in the 1980s businesses finally started exploiting a relatively untapped market: the appearance insecurities of men.

To demonstrate – today men are sold anti-cellulite cream for their pecs, hair transplants for their facial hair and “manscara” for their eyes. Then there are the boys’ action dolls that have gained muscle and lost body fat with each successive edition. Add this to the fact that 80% of the men featured in popular media such as Men’s Health magazine are of a muscular body build — with many of these models taking drastic measures in the weeks leading up to photos shoots to make sure they look lean.

It’s unsurprising then that boys today feel they are growing up in a world which focuses heavily upon their appearance. Of course, this is a problem that has plagued women and girls for decades. And in the way that this has impacted girls for so long, now this pressure is impacting on boys’ well-being. One recent study found almost one in five boys had resorted to diet pills, purging, skipping meals, steroids or tanning products to change their appearance.

But beyond appearance pressures, dating apps are doubly damaging because they often operate in a sphere where sexual racism is commonplace.

The dating app OKCupid recently analyzed sexual racism among one million of its male site users. The company found that compared to black, Asian or minority ethnic users, white users got more messages. White users were also found to be less likely to reply or match with users of a different race to themselves, and more likely to question interracial marriage.

Recent research from Australia also found that 15 percent of gay men on the dating app Grindr included sexual racism on their profiles. This was more likely to be the case if the profile user was white, and if the user held broader racist views.

I too have noticed gay men who write offensive terms that specify race preferences on their profiles — such as “Black=block”, “no gaysians” or even “no chocolate or rice”. In its terms and conditions Grindr bans offensive speech. Which is in part why, three years ago, I started a Twitter account, @GrindrRacism to encourage Grindr to remove offensive profiles. Disappointingly Grindr has often been slow to act though — meaning sexual racism is still present on the app.

Of course apps aren’t the cause of racism around sexual preferences. Instead like appearance pressures, users are influenced by what’s going on in wider society. By not tackling those problems in society, however, — for example cracking down on offensive speech — apps can act as enablers for racism and insecurity.

So while in some ways, these apps have brought our dating lives into the 21st century — where casual sex is more accepted and where gay men can meet other gay men without being imprisoned — in other ways, they also remind me of the 1950s, a time when shops would hang “No Blacks” signs in their doorways and when magazines like Playboy relentlessly objectified women’s appearances.

Ultimately given that more people are using dating apps than ever before, they need to work for everyone — not just those who are “attractive” or white.

Glen Jankowski is a Senior Lecturer in the School of Social Sciences at Leeds Beckett University.