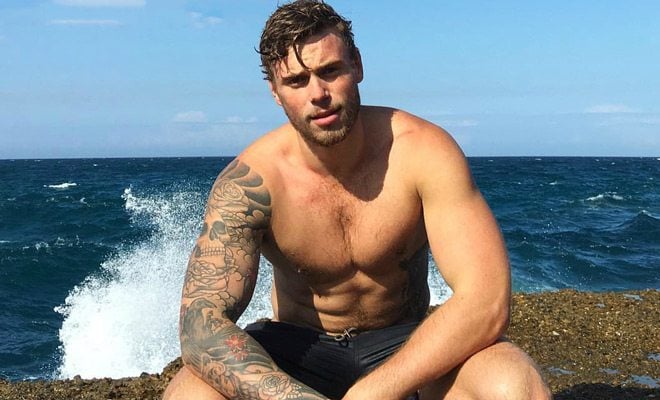 Clearly, Gus Kenworthy is a fan of public nudity. The 24-year-old Olympian spent his weekend skinny dipping in the beautiful Alpine waters of Colorado. Kenworthy posted an action shot of himself diving naked into a gorgeous lake, and apparently the water was chilly because “shrinkage ensued.”

In a Q&A with OUT magazine, Kenworthy admitted to being a bit of an exhibitionist saying, “[The photos] got a lot of comments and likes and everything, but I ended up not winning the laptop, so it was kind of all for nothing. But I guess sometimes it’s fun to be an exhibitionist. Otherwise I don’t think I really am. I mean I definitely see profiles on Instagram all the time, guys that I think are hot, whatever, and it’s just shirtless selfies. And I’m not complaining about it, but I don’t want that to be my social channel, and I mean I do it here and there, but I don’t want to be gratuitous.”

He also provided advice to other gay men who don’t feel confident or comfortable with their bodies. “I think it all kind of comes from within, and being comfortable with your body and your sexuality, with everything comes with time and comes with a sense of yourself. I feel like people get ashamed of their bodies, and I think it’s hard, especially because on Instagram where you see people who have the most ridiculously ripped physiques and crazy, crazy bodies. I think people also have to remember that Instagram and stuff like that isn’t real. It isn’t their real self, and it’s the projection that they want people to have of themselves. But even those super hot guys that you see can maybe make people feel insecure, and I feel like those people are also insecure about so many things. I would just encourage people to feel comfortable with themselves, regardless of what their body looks like, or any of that stuff. The social stuff is so easy to get caught up with — it’s so superficial,” he added.