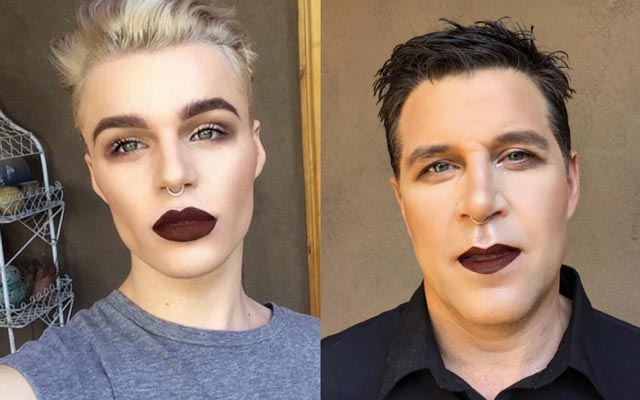 Like father like son, well, in this case, like son like father. A 16-year-old aspiring make-up artist gave his dad a makeover for Fathers Day, and he looks fierce AF. The supremely talented Spencer Claus posted photos online of his father-son shoot where both men were made up and striking similar poses.

Claus spoke with Mic.com about the experience and said, “It was more of an inside joke just because my dad is so un-glamorous. It started out just being funny for us but turned out to be an example of parenting done right.” Even at his age, Claus acknowledges that not all kids experimenting with their aesthetic are as lucky as he is to have such proud parents. The young man offers up this advice, “Parents, embracing your kid is so much easier than trying to change them. Whatever endeavors I choose, my parents support me whole-heartedly. Makeup was just another one of those things! So, teens, live your life; parents, help them do it. It could end up being really fun.”

AU NATUREL. I've been really into doing no-lash looks because a) lashes are stressful and b) I think those looks carry a cool, editorial look to them. This look is a look I would recommend to a client for easy, every day, beauty with little trouble. 🙂 For the base I used the @lauramercier oil-free tinted moisturizer in the shade Bisque and concealed with my @urbandecaycosmetics Naked Skin concealer in Light Neutral. Set all with my Laura Mercier setting powder. Bronzed up with my @tartecosmetics Amazonian clay bronzer and contoured with my @katvondbeauty Shade and Light kit. Highlight is @anastasiabeverlyhills Glow Kit in Sunburst. Eyes are @makeupgeekcosmetics in Peach Smoothie and Desert Sands. Brows are ABH Dipbrow in Dark Brown. Lashes are @benefitcosmetics RollerLash mascara. Lips are Sugar lip treatments in Honey. Enjoy 🙂 #thatglowtho #spencerclaus

Is it really that easy? Traditionally, we live in a society where femininity is often feared by men; but that might be changing thanks to Claus who says, “It’s none of your damn business who wears makeup and who doesn’t. I think a lot of boys use it as a means to express femininity, which I definitely do,” a sentiment that seems to be shared by many others online. It’s clear we still have a way to go, but with kids like Claus challenging expectations we know we will achieve equality sooner, rather than later — the tweet of the two gender-bending men has gained more than twenty-eight thousand “Favorites” and ten-thousand “Retweets,” which shows the progress we are making.

We are happy to see such an incredible response to such an extraordinary individual. We have a feeling we will be seeing much more to Spencer Claus in the coming months!