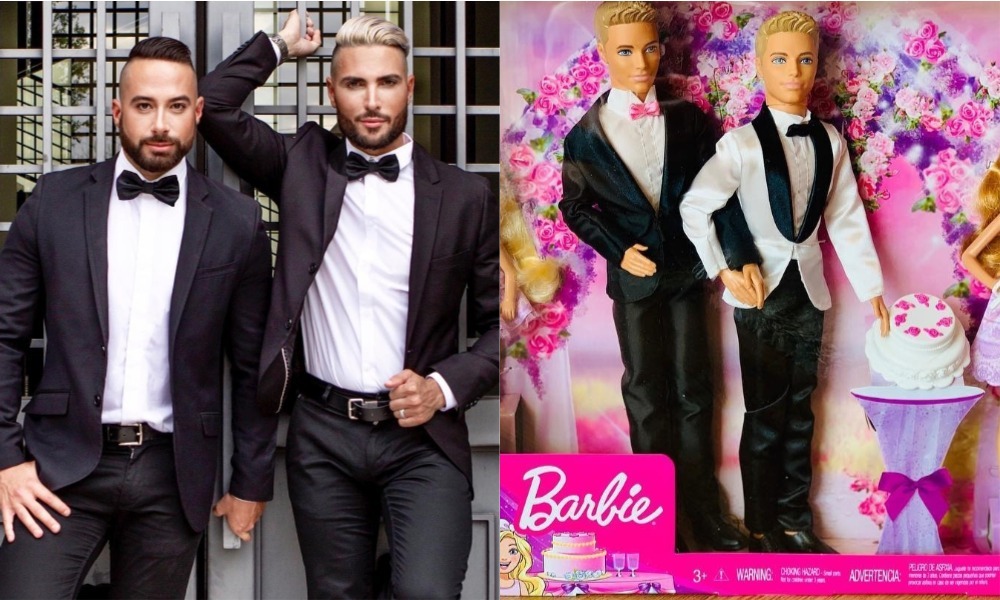 Except for Earring Magic Ken, Mattel has been quite conservative with Barbies male counterpart. However, fiancé’s Matt Jacobi and Nick Caprio may have motivated the toy giant to create a same-sex wedding set featuring “gay Ken dolls”. While brainstorming birthday present ideas for their eight-year-old niece, the couple came up with a fabulous idea.

The couple created a custom wedding set featuring two Ken dolls, a Chelsea Roberts doll and a Kelly/Shelly doll. The adorable wedding set is meant to replicate their upcoming wedding, which will feature their nieces, Natalie and her four-year-old sister, Coco, as flower girls.

In an interview with OUT, Jacobi explained their process: “We thought, why don’t we customize it and do our own thing.” To create the set, they searched various retail stores and found an almost perfect set; it featured two flowers girls, a cake, a groom, and a bride. So, they swapped out the bride with a second Ken doll and viola.

Jacobi continued, “[Natalie] opened it up and said ‘it looks just like you guys, I love it!”

Although she loved the gift, the couple felt saddened that the concept didn’t already exist. They took to Instagram to voice their disappointment.

“We had a difficult time finding a same-sex wedding set to give to my niece for her 8th birthday. [She] and her little sister are flower girls in our upcoming May wedding. We thought it would be special to give her something with a little meaning behind it. What a bummer you don’t make one with two grooms. Anyway, we had to get creative and make a couple of purchases. I hope our custom gift inspires you to make a #GayWedding set.”

The post went viral and caught Mattel’s attention. The company reached out via email. “It was a beautiful email, they were super responsive,” says Jacobi. Mattel scheduled a meeting with the couple and their design team to discuss a possible set.

“My nieces only knows that only Uncle Matt loves Uncle Nick and Uncle Nick loves Uncle Matt,” says Jacobi. “Kids are taught to hate; they’re taught to have a negative feeling about those who don’t fit the social norm. It’s time that we bring positive examples into the commercial market; toys are tools for teaching.”