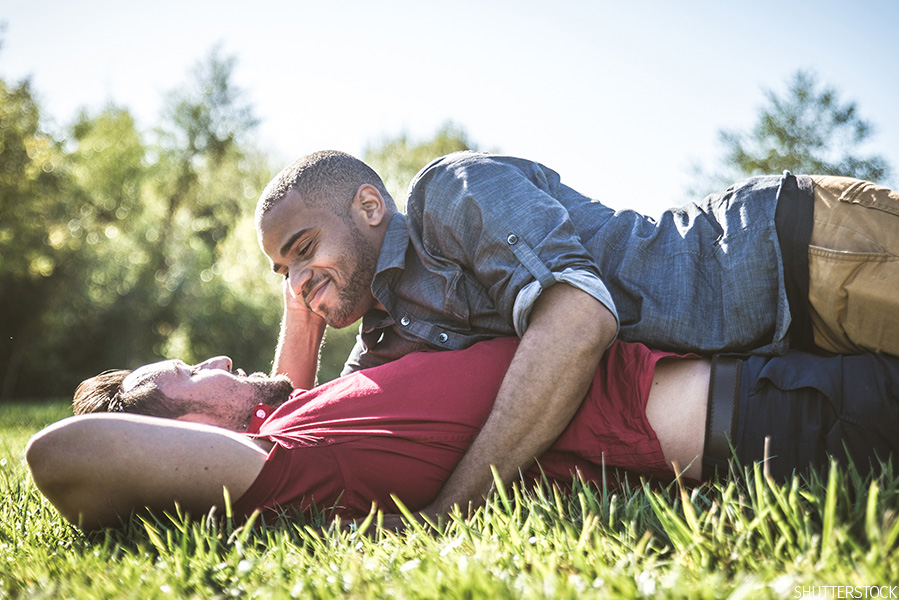 Why male couples should think about HIV in their relationships.

In a relationship there are myriad issues to manage. Who walks the dog? Does his mother like me? Whom are we supporting to win RuPaul’s Drag Race All Stars 2? But there is one issue that can often be harder to manage — how do we as a couple deal with HIV?

Gay men and other men who have sex with men are the only risk group in the U.S. to be experiencing an increase in HIV infections. Over the past four decades of the epidemic, public health messaging about HIV focused mainly on the risks created by unsafe casual sex.

However, recent studies show that one- to two-thirds of new infections in fact come from main partners.

And if you think about it, this makes sense. The average couple has sex 103 times per year, so you literally have more potential exposures to HIV from your main partner than you would in a one-night stand.

Issues of trust and a desire for intimacy mean that men are often less likely to use condoms with their male partners. Not using a condom can be a way to show you trust your partner more, to feel closer to your partner, or it may just not be convenient to always be using condoms.

Recent research by my team showed that gay men in relationships perceive themselves to be at less risk of HIV and test less frequently for HIV than single men, despite frequent non-use of condoms with their main partners.

I am fully aware that this may make me sound anti-relationship (something my partner of seven years may take umbrage at). I am not. Relationships are fantastic: I have found the person who doesn’t mind me watching “Holiday Baking Championship” while knitting and shouting at the TV, and that is an awesome feeling. But what I am saying is that we need to think about how men in relationships manage HIV.

As an HIV and AIDS researcher, however, I see the numbers and am convinced that there are serious issues here.

With marriage equality now legal in the U.S. and the growing visibility of male couples, it is vital that HIV research and programming recognize not only the needs of male couples, but also that couples have the potential to work together on understanding and managing HIV in their relationship.

Beyond messaging, the love blindness that often afflicts us in the early stages of a relationship may prevent us from asking questions about HIV status and from talking to our partners about condom use. As a volunteer HIV counselor and tester, I can’t tell you how many times I have had a client tell me “If he was HIV positive he would tell me, he loves me.” But this assumes he knows his own status.

It’s not that all men who have sex with men don’t talk about sex in their relationships. Recent research showed that 90 percent report discussing sexual agreements with their main partner and that 64 percent decide to be monogamous. But given the high prevalence of HIV among gay men in the U.S., there is a high risk that men are entering relationships in which one or both are HIV positive.

But at the University of Michigan School of Nursing, scientists at The Center for Sexuality and Health Disparities, of which I am director, are conducting innovative research to tackle the problems experienced by male couples when dealing with HIV in their relationships. The center is home to two National Institutes of Health-funded projects.

The first study, Stronger Together, aims to provide couples in which one is HIV negative and one is HIV positive (known as sero-discordant couples) with the opportunity to come together and make informed decisions that allow them to keep their relationship healthy. This puts the couple at the center of managing their own HIV risk. Guided by a counselor, the couple sets prevention goals and will learn communication skills that allow them to discuss and manage HIV in their relationship.

The second, Project Nexus, uses video chat to allow couples to test for HIV together in their own home. Couples are sent home HIV testing kits, and a counselor walks them through the process via a secure video chat system, guiding the couple through the testing process and helping them to create a plan to keep themselves and their relationship healthy.

Central to both of these projects is the concept of helping couples to work together to manage HIV in their relationships. Whether they are both HIV negative, both HIV positive, or if they have different HIV statuses, all couples need a plan that they agree upon and can work together to implement. Our work centers on giving couples those skills.

By teaching couples communication skills, helping them to talk about HIV in their relationships and providing them with access to information and resources that they can use together, these projects allow couples to work together to manage HIV risk.

Rob Stephenson is a Professor of Nursing at University of Michigan.