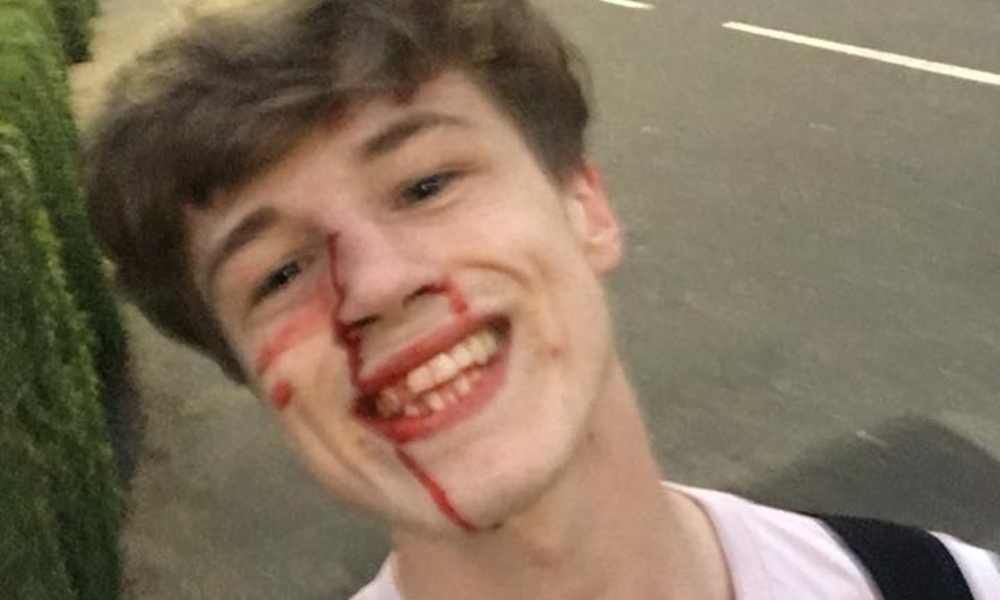 The young man’s attacker called him a “f*ggot” and then lashed out when the man stood up for himself.

Blair Wilson, 21, went viral after posting a selfie of his beaming, but bleeding face, which was the aftermath of a scuffle with a homophobe. Wilson posted the photo a few minutes after the man assaulted him.

At the time of the alleged attack, Wilson was in the small town of Neilston, Scotland. He posted the photo shortly after the incident on June 29. He evaded the attack but was left with a deep gash on his nose.

In the post, Wilson called out the man “that called me a faggot … then tried to attack me when I called him ‘hen’”.

“Trust it to be someone insecure with his own sexuality trying to take it out on someone secure in himself. Wish u well,” Wilson penned on Facebook.

People from around the world have reached out to Wilson to show their support. So far, Wilson’s post has garnered more than 2,000 reactions.

In an interview with Barrhead News, Wilson said, “I thought, clearly, this person doesn’t realize how close Neilston is and I just wanted to post something so that, when he sobered up, he might see how much love and support I have.”

“I knew, as soon as it happened, that I could either keep quiet and feel embarrassed about it or I could shame him over Facebook. As soon as I posted it, even though my nose was still bleeding, I didn’t care.”

“It’s amazing. I’ve heard from so many people I haven’t spoken to in ages and people I don’t even know telling me I’m an inspiration and stuff. It’s made me feel so good about myself,” he continued.

“The message I wanted to get across is you need to stick up for yourself. Maybe don’t go getting yourself hurt, but show them you have friends, you are loved.”

Wilson said he was shocked to encounter homophobia in Neilston. However, he wanted to demonstrate that despite his wounds, homophobic people were the real minorities.

“I think some people think because you are a different sexuality from them you have no friends and everyone is in the same mindset of them when the reality is they’re the minority,” he said.

“You can prove to them you’re much more loved than they will ever be if they live a life of hate.”

According to a local newspaper, the local police are investigating the assault.