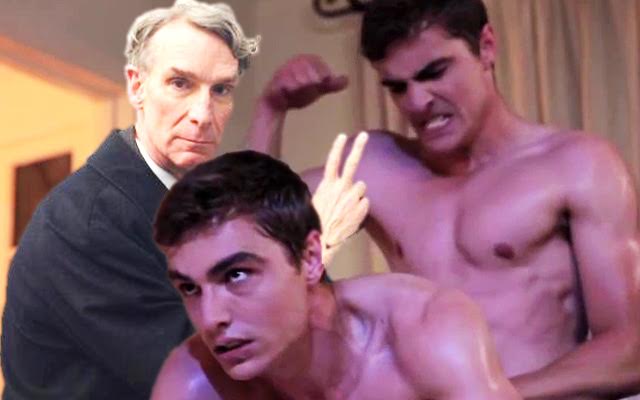 Bill Nye the Science Guy answered an unidentified reader’s question about homosexuality and evolution. Nye’s response is brilliant. Basically, he says homosexuality is natural. Many species, including dolphins and bonobos have gay sex, they just don’t have to come out in a YouTube video.

Hi, Bill. This is Jason Gots from Big Think. I’m reading a question that somebody submitted in written form who wished to remain anonymous. But it seemed like a question that it would be good to have you answer. “I have a question about homosexuality,” he asks. “If the purpose of a species is to reproduce and survive, how would it make sense evolutionarily for humans to have same sex preferences? Are humans the only ones who practice homosexuality?

And if so does this mean that homosexuality is a product of human’s personal whim as opposed to instinct?” So when I was growing up there was this controversial and super bestselling book called The Naked Ape. And this guy, the author, Desmond Morris claimed, I guess he documented that there is homosexual behavior among primates. And from what I remember – I haven’t read it in many years – was chimpanzees and Bonobo’s exhibit homosexual behavior. And the answer nowadays we give to everybody about this is it’s a spectrum. I don’t know about you but I have known a great many gay men who are married, who have babies, who have kids.
So apparently – I’m not an authority on this. I’m an observer of the human condition.

Apparently, there’s a spectrum. Some people are more inclined to have sex with people of their same sex than others. And I think if you just watch the news right now, you can see that for yourself. And so being somewhere on the spectrum of heterosexual with homosexual being on that it’s not genetically lethal, you still have kids anyway. And you’ll hear people talk about the feminine side. You’ll hear people talk about the masculine side.
You’ll hear women use the expression well she’s got a lot of balls which can’t literally be true if we’re using balls in that conventional construction. So I would say that it’s something that happens in nature and I remember very well in this book – now I haven’t read it in a long time but man it was a big deal.

Openly talking about sex in the 1960s was a big deal that he claimed that there was more homosexuality in zoos than he observed in nature. And that may be just because we happen to capture a couple of homosexual Bonobos or whatever. In other words, the sample size is way too small to extrapolate. So let’s celebrate being alive everybody. Apparently, it’s just something that happens in nature and look, we’re all here.