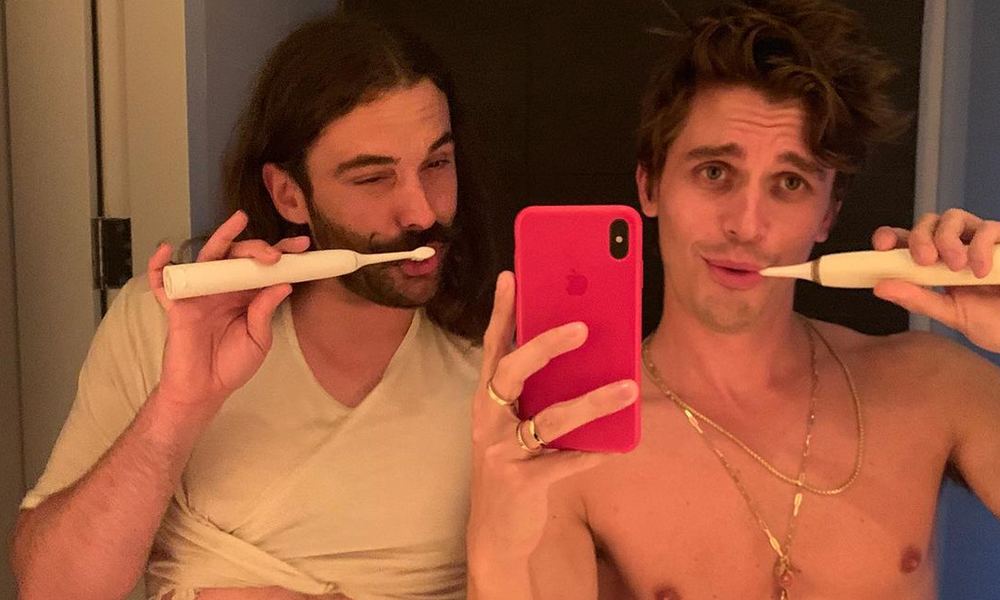 Antoni Porowski and JVN Say They Are “Finally Together”

It doesn’t take a genius to figure out that Jonathan Van Ness once had a teeny tiny crush on Antoni Porowski. The Queer Eye star eluded to that on more than one occasion. Who can blame them? Porowski has been a fan favorite for quite some time—possibly in part due to his tasteful thirst traps on Instagram. It goes both ways, too. Van Ness and Porowski famously exchange flirtatious banter during the show. Now it seems they’re taking it to the next level. Antoni Porowski and JVN took to social media today to announce that they are “finally together.”

“After years of joking about it, we’re finally together,” Porowski wrote in a Tweet. He included an image of him and Van Ness holding hands, looking very couple-like. “More tomorrow,” he continued.

Some personal news ❤ after years of joking about it, we’re finally together. Here’s to giving things a shot 🙂 More tomorrow pic.twitter.com/H4ZFumqkf9

Almost immediately after, Van Ness took to Twitter to share a similar update. “We’re finally together,” Van Ness wrote. “Details tomorrow, but know that we’re very happy and feeling supported by the people around us.” They included an image taken at the same time, with both stars nestled together, staring lovingly into each other’s eyes.

We’re finally together ❤️ Details tomorrow, but know that we’re very happy and feeling supported by the people around us 🏳️‍🌈 pic.twitter.com/9wNStao1sd

More Than Meets The Eye

As adorable as these photos are, we all know that there is more to this than meets the eye. First and foremost, Van Ness is already married. They have been hitched to Mark Peacock since 2020, and appear to be happily wed as of last week. Additionally, Porowski recently celebrated his third anniversary with his boyfriend Kevin Harrington. So, unless things have changed very dramatically and very rapidly, something else is clearly afoot.

Barring that they reached some sort of polyamorous arrangement, it’s likely that the Queer Eye stars are actually embarking on a new project or partnership together, with the announcement coming tomorrow. Whatever the story, we can’t get too mad at them for toying with our emotions. They are our faves after all.

Check back again tomorrow for the scoop, and in the meantime join us as we sample some choice reactions (and detective work) from gay Twitter.

I bet they are partnering in business! Their account on Instagram only follows three people, one of them being a dog treat/food brand. The other two being their own accounts. pic.twitter.com/92DhanCFzp

Confirmed, that’s definitely what it is pic.twitter.com/19tuwlNGdI

You can’t pull the wool over these gay eyes.

Antoni Porowski and JVN Say They Are “Finally Together”